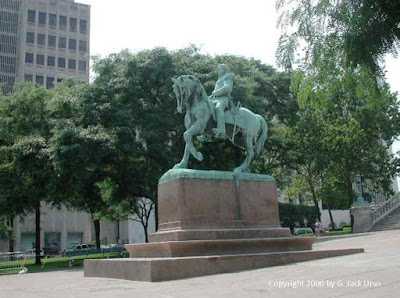 Statue of General Philip Sheridan on the grounds of the New York State Capitol, Albany, NY.
On the grounds of the State Capitol building in Albany, NY, resides a statue of city native General Philip Sheridan. Erected in 1914 while many Civil War veterans were still alive, the memorial honors Sheridan who played an important role the defeat of the Confederacy. After the war, Sheridan was put in command of the Department of the Missouri to fight the various Native American tribes and bring them into submission.


According to a Jun. 18, 2016, article in The Guardian, forensic examination of the bodies of 14 slaves (one man, six women, five children, and two infants) owned by Schuyler showed the adults were worked hard and, despite being well-muscled, had severe arthritis and some broken bones, typical of the treatment of people in bondage sentenced to a life of hard labor. It is notable that half of the dead found where children.


By removing those statues and putting them in museums where they belong we are not forgetting or rewriting the past. Rather, we are finally listening to the voices we have ignored for far too long.
●             ●             ●
Posted by G. Jack Urso at 7:58 PM
Email ThisBlogThis!Share to TwitterShare to FacebookShare to Pinterest
Labels: General Philip Sheridan