From the late 1960s through the late 1970s, Nonesuch producers for the African albums recorded the pieces in the field, on street corners, in universities, marketplaces, cities, rural villages, along the coast, and in the deep interior. These albums provide the Western ear with a broad exposure to the wide variety of indigenous instruments and musical styles which, in many ways, still remain relatively unknown outside the Dark Continent except to those of us who appreciate the vast palate of World Music offerings. These collections became widely influential to a whole generation of Western musicians. In fact, some tracks from the Nonesuch Explorer Series were included with the Voyager Golden Record that was attached to the Voyager I spacecraft launched in 1977.


While samplers and “best of” collections are typically a mélange of sometimes aesthetically discordant tracks lacking a unifying thematic cohesiveness, Africa, Music from the Nonesuch Explorer Series manages to avoid this pitfall by focusing on primarily sub-Sharan Africa and those nations North of South Africa. From these regions come the rhythms and sounds that influenced whole genres of Western music including Jazz and Rock and Roll.


Other titles from the Nonesuch explorer series uploaded to the Aeolus 13 Umbra YouTube channel and profiled on this website include Kōhachiro Miyata: Shakuhachi – The Japanese Flute and Ghana: Ancient Ceremonies, Songs & Dance Music.
Catalog of Nonesuch Explorer Series Albums 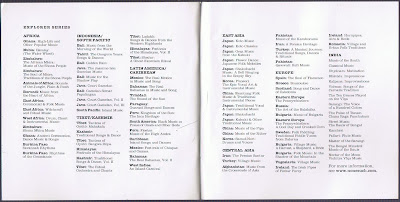 Listen to the entire album at the top of this article or individual tracks by clicking on the links below.