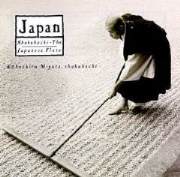 Shakuhachi —The Japanese Flute, by Kōhachiro Miyata (b. 1938) is a 1977 Elektra Nonesuch Explorer Series release. This recording introduced Miyata to the United States and quickly became a classic and endures as a milestone in the popularization of the World Music genre.  The ethereal sounds of the shakuhachi peacefully flow around the listener, yet there is an element of contained tension. An eerie undertone persists throughout the music that keeps the listener engaged with the compositions rather than drifting off into their own inner thoughts. The complete album and links to each track are available below from the Aeolus 13 Umbra YouTube channel.


The album was reissued in CD format in the 1990s, which I obtained through BMG Music Service. Some may not miss the old mail order record clubs, but the choice of free CDs compelled me to sample genres of music I would otherwise likely never be exposed to.


I originally uploaded this album on YouTube in 2014 as background music for Views of the Planet Earth Captured by the Crew of STS-75 where it barely gets a mention; however, as one of my favorite recordings, it has been long overdue to be featured on its own accord. Here, Shakuhachi — The Japanese Flute and images of a slowly rotating Earth blend to form a sort of mandala, creating — almost literally — a contemplative space.


Listen to the album on the YouTube video above or each track by clicking on the links below.

Following are the liner notes for Shakuhachi — The Japanese Flute, by David Loeb, and transcribed retaining the  original spelling, punctuation, and italicization.


1. Honshirabe. This short piece corresponds to a prelude or overture, and today is often used at the beginning of a program. The term “shirabe,” which appears frequently in titles of Japanese instrumental compositions, means “investigation,” specifically with respect to the instrument’s tuning. The written character for “hon” means “central” or “primary,” and with stringed instruments it alludes to the most frequently employed tunings.


2. Sanya. This piece is in arch form, with a central section higher in pitch and more agitated than the opening and closing sections. The title means “Three Valleys.” Both Honshirabe and Sanya are played on a 2.4 foot shakuhachi.


3. Tsuru no Sugomori. Perhaps no other composition in the entire solo repertory has suffered so much mutilation as this haunting work. The title means “Tenderness of Cranes,” specifically referring to such tenderness as is expressed between parent birds and their young. Many of the trill effects can be considered as imitation of bird sounds, although so many variants of this piece exist — not only in different regions, but among different schools and even different performers — that the reference is not always specific. In the hands of some players it has degenerated into little more than a vehicle for virtuoso display/ The piece is played her on the standard (1.8 foot) shakuhachi.
4. Shika no Tōne. This is one of the most famous shakuhachi compositions, and probably the most recent of the works heard here: it dates from the 18th century. Entitled “The Sound of Deer Calling to One Another,” the piece’s special effects call for a particular kind of audible breathing in which the melodic line is never lost. Often the work is heard as a duet for two shakuhachi, and it is not certain which version is the original. It is played here on the standard-sized instrument (this particular composition is rarely, if ever, played on other sizes).

5. Akita Sugagaki. Akita is region near the northern end of the main island of Japan; in ancient times it was largely unsettled wilderness. Since there is no certainty that any of the melodic ideas come from this province, it seems likely that the location was used in the title simply to suggest the remote and in accessible. Sugagaki is a term that occurs in a number of titles of 17th-century Japanese and Okinawan koto pieces in variation form; unlike most solo shakuhachi works, Akita Sugagaki is a loosely constructed series of variations. It is played here on the standard-sized instrument.
﻿History of the Shakuhachi, by David Loeb, from the liner notes to Shakuhachi — The Japanese Flute:


The shakuhachi is the most important wind instrument of Japan. Because of its similarities to the Chinese tung-hsiao, it is generally thought to have come to Japan from China, but its depiction in religious art of the 8th century indicates that this type of instrument has been used in Japan for well over a millennium. 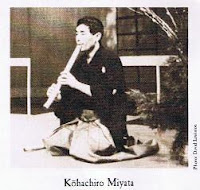 There are few, if any, instruments in the world that associate so complex a playing technique with such simplicity of construction. The shakuhachi is a hollowed-out bamboo tube with four holes in front and one in back; there are no keys. The player covers most of the upper open end of the tube with his lower lip and then blows across the remaining area of the opening. Directly opposite the lip, the tube is slightly cut away to provide a sharp edge for the wind stream. Despite the presence of only five holes, the instrument has a complete chromatic scale of two octaves and a fifth. Tones outside the instrument’s natural scale are obtained by partially covering holes in various combinations and by tilting the instrument towards or away from the body. By gradual application of such techniques, the shakuhachi is also capable of a wide range of slides, some extending up to a major third. Certain special effects such as flutter-tonguing and distinctly audible breathing, which in Western music are associated with 20th century avant-garde flute repertory, were a standard part of traditional shakuhachi technique by the 18th century.

The name shakuhachi means 1.8 shaku (1 shaku = .994 feet). That length of bamboo tube has long been regarded as standard, with the D above middle C as the fundamental tone. However, the size of the instrument ultimately depends on the size of the bamboo joint, so that different sizes (graduated in tenths of shaku) exist, the most common sizes after the standard 1.8 being 1.6 (E), 2.1 (B), and 2.4 (A). The smaller instruments produce a clearer, more brilliant and penetrating sound, while the larger ones have a warmer and fuller tone (rather like the flute, recorder, or clarinet families of Western instruments). The larger shakuhachi are able to play so softly as to become almost inaudible without any change of color. All sizes of the instruments possess considerable dynamic range in all registers.

During the Edo period (early-17th to mid-19th centuries), the shakuhachi was used primarily in chamber ensembles (with koto and shamisen), but in recent years there has been a revival of the ancient solo literature. Many of the solo pieces are conceived as aids for meditation, both for the listener and player, the tempos are predominately slow, with variety provided by shorter notes that reflect tome-painting are not uncommon; many shakuhachi compositions also draw on distinctive ancient melodies in a way that preserves their unique regional character without undue emphasis on folkloric aspects.
●             ●             ●
Posted by G. Jack Urso at 7:53 AM
Email ThisBlogThis!Share to TwitterShare to FacebookShare to Pinterest
Labels: Kōhachiro Miyata, Shakuhachi, Shakuhachi – The Japanese Flute