Family Affairs and Pieces of Our Childhood

Some memories from our childhood are buried deep, yet they form the very basis of our life — how we look at it and who we are as individuals. Even the most ephemeral events can yield the longest-lasting results.
Sometime in 1970 or 71, I remember sitting with my grandmother, Nana Fran, in the family room of her home on Woodlawn Avenue in Albany. It was a split-level ranch with a modern open kitchen with wall-to-wall carpeting and a family room similarly decorated with the prerequisite iconic wood paneling and wet bar that defined the era. It was a long way from the crowded two-family homes on Second Avenue from where they moved, or Flatbush Avenue in Brooklyn where they started out. 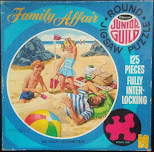 In time, the pieces all come together.