Electronic Labyrinth: THX-1138 4EB — An Artifact of the Future


Electronic Labyrinth: THX-1138 4EB is a 15-minute science fiction film produced by George Lucas in 1967 while he was student at the film school of the University of Southern California (USC). It served as the basis for the full-length 1971 feature film, THX 1138, directed by Lucas and starring Robert Duvall, Donald Pleasence, Maggie McOmie, Don Pedro Colley, and Ian Wolfe. An important and influential film, THX 1138 is a stunning visual masterpiece whose story is told through a series of images with little exposition. Like 2001: A Space Odyssey, it challenges the viewers’ preconceptions of the narrative and can justifiably be regarded as a work of art. All the basic elements of the 1971 production can be seen in the 1967 student film, provided above from the Aeolus 13 Umbra YouTube channel.


Lucas wrote and produced Electronic Labyrinth: THX-1138 4EB based on an idea by his USC classmates Walter Murch and Matthew Robinson. The resulting film covers what essentially became the final sequence in THX 1138 — the chase and escape scene. 1967 and 1968 were important years in science fiction. In addition to Electronic Labyrinth: THX-1138 4EB, the novel Logan’s Run was also released in 1967 followed by the films 2001: A Space Odyssey and Planet of the Apes in 1968. These works show a darker, dystopic view of the future more reflective of the times in which they were produced. As 1967 was considered the “Summer of Love,” the events of 1968 were described by Time magazine as “Nightmares in the Year of the Monkey” (referring to the Chinese Zodiac). The Tet Offensive in Vietnam, the police riot at the Democratic National Convention, and the assassinations of Martin Luther King Jr. and Robert Kennedy in 1968 all signaled a downward turn in U.S. history.


Lucas asserts in the documentary Artifact of the Future: The Making of THX 1138, that the film is not about the future, but rather it is a critique about the modern consumer lifestyle. One of the hallmarks of the 1960s counterculture was a criticism of the Western consumer culture that grew after World War II. An increasing uniformity of dress, goods, education, accommodations, and employment was seen as an growing threat to individuality. As Lucas himself calls it, the film is a parable, but the story is told in images, not words. As a result, it lacks the structure of a traditional narrative.  This approach provides a platform for cutting-edge filmmaking.

Trailer for the 1971 feature film.
The abstract nature of the film can be explained, as Walter Murch puts it, as an “artifact of the future.” An artifact from the past, for example a mosaic, may be damaged and have pieces missing. There is nothing to explain what you’re looking at, who the characters are, and what it means. In a similar way, THX-1138 4 EB, and the later feature film, are artifacts of the future. They provide us with a glimpse of the future, but not the complete picture. The viewer becomes an archeologist discovering a lost world, and to that end the act of viewing is no longer passive, it becomes an act of conscious engagement. As a consequence, we are drawn into the film and become more involved in the narrative.


In Electronic Labyrinth: THX-1138 4EB, Lucas builds a futuristic world by using such locations as the computer center at USC, and the post-modern architecture at a parking lot at UCLA, the Los Angeles International Airport, and the Van Nuys Airport. Like an artifact that only provides a partial image of the past, Lucas only needs to provide a partial image of the future. He doesn’t need to fully define the politics and technology of his future world, he only needs to suggest them. While effective with the THX 1138 concept, this approach had mixed success in Star Wars where the lack of definition of those two elements worked both for and against the first film trilogy. While moving the story along, it also created plot holes and inconsistencies. 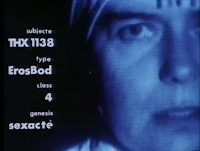 THX-1138 4EB is set in a subterranean post-apocalyptic world where the society is closed and every aspect of life controlled. Individuality is suppressed through uniformity. Everyone dresses the same. There are no names, only numerical designations.  As the 1971 film later portrayed, individuality is further repressed with shaven heads, drugs are used to sublimate sexual desire and improve work performance, and religion is used to maintain conformity. One key plot point in both the 1967 and 1971 films, sometimes overlooked due to the unconventional narrative, is that there are two classes of people: those born in a clinic and those born as the result of a sex act. The “EB” in Electronic Labyrinth: THX-1138 4EB stands for “ErosBod,” which denotes those born of a sex act (see screen shot, above). EBs are considered inferior to those born in a clinic, or “ClinicBods.” The existence of EBs suggests that the city isn't quite as in command of things as it appears to be. The feature film explores this further by showing malfunctioning robot police, horrific workplace accidents, and other system glitches. Despite the apparent planning and sophistication, the city is breaking down and individuals are a reminder that the machine is broken.


At the start of Electronic Labyrinth: THX-1138 4EB, we see THX’s mate, YYO 7117, reject him due to his origin as an ErosBod (YYO herself is a ClinicBod). This in turn drives THX to escape to the outside world, which he’s been taught means certain death. Nevertheless, THX would rather leave and face the unknown than stay in a society that regards him as a reject. This ethical dilemma was played out in various scenarios throughout the 1960s, from drop-outs to draft dodgers to those embracing alternate lifestyles.


THX-1138 4EB, Logan's Run (the novel), 2001: A Space Odyssey, and Planet of the Apes heralded in a darker, more dystopic era of science fiction film and reflected the cynicism of their times. Ironically, it would be George Lucas’ seminal work Star Wars that put an end to the pessimism in sci-fi movies that his first film, Electronic Labyrinth: THX-1138 4EB, pioneered.


The Prayers of Shiva — A spoken word performance I produced layered with audio clips from THX 1138 and the TV show The Prisoner: