1971 Radio Free Europe PSA: “The IN Sound from Outside”

From the Aeolus 13 Umbra YouTube channel.
“The IN Sound from Outside”

The 1971 Radio Free Europe (RFE) Public Service Announcement (PSA), “The IN Sound from Outside,” features Peter, a young Hungarian expatriate who fled his native country’s Communist government following the 1956 Revolution and subsequent Soviet military occupation. He runs up the steps to his radio studio and, with his coat coolly draped on his shoulders, introduces The Drifters’ “On Broadway.”


RFE’s mission was to promote democratic values and spread news and music otherwise suppressed in Warsaw Pact nations. Its sister group, Radio Liberty (RL) focused just on the Soviet Union. Both were funded by the CIA as a public relations outreach, however, despite that, RFE was a largely independent group that, while dedicated to promoting democratic values, was reportedly allowed to operate with minimal interference from the CIA.


According to the Cold War Radio Museum, 1971 was a pivotal year for the RFE/RL when Republican U.S. Senator Clifford Case who proposed to kill funding for the broadcasting groups, so this PSA comes at a time when RFE/RL needed to raise its profile at home and maintain its funding. Despite the wide airplay of this particular PSA, CIA funding ceased in 1972 and in 1974 RFE/RL came under the auspices of the newly created Board for International Broadcasting (BIB), through which Congress provided funding which then would be distributed to RFE/RL and other similar such groups. The result probably provided for tightened control over the organizations.


As noted in ciphers released by Radio Free Europe (see below), the filming of the PSA took place in 1968. The café scene, implied to be behind the Iron Curtain, was, for "reasons, including time and money,” shot in Vienna, Austria. The script called for finding 15 ex-patriate Hungarian students, between 19 and 24. The shoot itself took place on Wed., July 17, 1968.
﻿
﻿A second shoot was scheduled in New York City on Monday, Aug. 5. Sharp-eyed commentators who speculated that the street scenes took place in New York City are indeed correct. The RFE ciphers indicate that the building the announcer is shown entering is 2 Park Avenue, where the RFE studio was located on the 25th floor. It was there that our earnest young DJ introduced The Drifter’s “On Broadvey” in his native Hungarian to his audience behind the Iron Curtin. The narration was recorded Wed., Aug. 14. Journalist Mike Wallace agreed to do the narration, although it sounds like someone else was tapped for the final version seen on TV. Although filmed in 1968, and probably aired shortly thereafter, the above version dates to 1971 as identified by the post office box number given at the end, 1971, which is how RFE tracked the broadcasts.


The images of a handsome young man and a smoke-filled coffee house has a certain romance to it and the power of this short film is evident in the number of Baby Boomers and early Gen Xers who recall the PSA quite fondly. For me personally, it inspired an early interest in politics and radio. Later in life when I did work in broadcasting, every time I got behind the mike the fleeting image of this PSA was always in the back of my mind.


Some may decry the efforts of RFE as just Western propaganda, and admittedly that is certainly true; however, such claims also ignore the great desire by those people locked behind the Iron Curtain for self-determination and freedom from Soviet oppression. As one commenter on the PSA noted, “Radio crossed borders where people couldn’t” (see comments on the above YouTube video). This long-suppressed desire exploded following the fall of the Berlin Wall in 1989 when revolution swept through the Eastern Europe. While Hungary moved from communism to democracy and capitalism relatively peacefully, if not without economic problems, in neighboring Romania the changeover was more violent and ended with the execution of its leader Nicolae Ceaușescu and his wife Elena.


Who is That Guy? 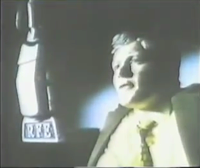 Identifying the good-looking young announcer in the PSA was a real challenge. With a background in corporate intelligence and defense analysis, I like to think I'm pretty good at finding an answer if it is out there; nevertheless, I came up empty-handed when trying to identify who “Peter” was. His last name, while mentioned at the start of the PSA, is obscured by the ambient street noise. I reached out to native Hungarian speakers in hope they could recognize the name, but to no avail. After months of researching, I finally contacted Radio Free Europe and emailed Martin Zvaners, Deputy Director, Media and Public Affairs, who informed me that the young man’s name is Peter Záboji. During the Hungarian Revolution in 1956, Záboji and his family left Budapest. He later became a freelance producer,  serving as the disc jockey for the “Teenager Party” rock music show on RFE (3-6 p.m. Saturdays and Sundays) and hosting a one-hour jazz program on Friday afternoons under the name Erdei Péter. "On Broadway," in fact, was Záboji's theme song used on his shows, though it's unclear whether it was used for the rock or the jazz program, or both.
﻿ This is a real scoop for Aeolus 13 Umbra readers as there is no information in the open press associating Záboji with this famous PSA and the text in the scans of the cipher documents are not indexed by search engines. So, this information was buried quite deep in the Internet. My thanks go out to Martin Zvaners for taking the time to respond to my inquiry and share with me the ciphers from the The Vera and Donald Blinken Open Society Archives (OSA) at Central European University (CEU).


Záboji was highly educated with a B.A. in Physics and Mathematics and a M.Sc. in Business (Diplom-Kaufmann) from Ludwig-Maximilian University in Munich, where he was attending at the time of the filming. In 1970, he began working for IBM and later moved on to Siemens in 1973. Following the resumption of democracy in Hungary in 1990, he went on to make significant contributions to his homeland. According to Zvaners, Záboji became an angel investor and was influential in establishing Budapest’s success as a high-tech hub and helping create startups through his “European Entrepreneurship Foundation.” He later went on to teach at the Institut Européen d'Administration des Affaires (INSEAD) in France, and St Ignatius College and CEU Business School in Budapest. In April 2014, Záboji was awarded the Knight of Cross by the President of Hungary János Áder, “In recognition for bringing entrepreneurial spirit and culture to Hungary,” as noted in Záboji’s LinkedIn profile.


Záboji carried on the very best traditions of the mission of Radio Free Europe to bring democracy and economic opportunity to Central Europe. Born, according to open sources, December 25, 1943, he was 24 at the time of the filming of the PSA in 1968, and passed away July 15, 2015, at the age of 71. A true, if underrated, hero of Western democracy, Záboji’s contributions made both Hungry and the world a better place to live in.