1971 Coca-Cola Commercial: I’d Like to Buy the World a Coke 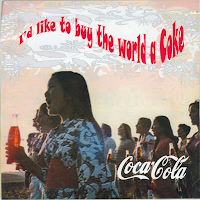 One of the most successful and iconic commercials ever produced is the 1971 Coca-Cola Commercial, “I’d Like to Teach the World to Sing.” On a hillside in Italy, Coca-Cola’s advertising company McCann Erickson (now McCann) gathered hundreds of young people from across the globe in their native dress to sing a song of togetherness and Coke. Admittedly this was simple grasp for a larger market share of the carbonated beverage market by what was then and still remains one of the largest international companies. Nevertheless, there are times when the commercial airspace can embody the zeitgeist of the era, capture a moment in time, and elevate the audience spiritually and emotionally. This commercial achieves that.


The commercial is probably dismissed by its cynical detractors as treacly tripe, and there is a certain saccharine sweetness about it. Between the love beads, Nehru jackets, and dashikis, as well as representatives of each possible race, creed, and color, it looks like every 60s/early 70’s stereotype exploded on screen. Yet, for those of us alive today who remember when the commercial first aired, in the midst of an unpopular war, civil strife, racism, and a president of dubious ethics (sound familiar?), it uncomplicated a complicated world — at least for 60 seconds.

On Jan. 8, 1971, Bill Backer, the McCann Erickson’s creative director for the Coca-Cola account, was stuck in an Irish airport due to a fog delay in London. He was headed there to meet with Billy Davis, the music director on the account, to discuss a new ad campaign for Coke which would use music by songwriters Roger Cook and Roger Greenaway and have the final product recorded by the then-popular group The New Seekers. The problem was that while they had the music, they didn't yet have the message, but this layover would provide the inspiration.


While waiting in the airport café, Backer noticed that his fellow passengers, who at first were angry at the delay, began to loosen up and chat and laugh while enjoying something to eat and something to drink — Coke, in fact. According to a Jan. 1, 2012, article on the Coca-Cola corporate website, Backer later recounted:


In that moment [I] saw a bottle of Coke in a whole new light . . .  [I] began to see a bottle of Coca-Cola as more than a drink that refreshed a hundred million people a day in almost every corner of the globe. So [I] began to see the familiar words, 'Let's have a Coke,' as more than an invitation to pause for refreshment. They were actually a subtle way of saying, 'Let's keep each other company for a little while.' And [I] knew they were being said all over the world as [I] sat there in Ireland. So that was the basic idea: to see Coke not as it was originally designed to be — a liquid refresher — but as a tiny bit of commonality between all peoples, a universally liked formula that would help to keep them company for a few minutes.


There seems to be some confusion over who came up with the key lyric of buying the world a home. Backer, in a May 18, 2015, Slate article, noted he dashed down the key phrases, “I’ve got to teach the world to sing. I’d like to buy the world a home and furnish it with love.” Davis, however, also lays claim to those particular words. As reported by Coca-Cola, Davis, while liking Backer's idea of buying the world a Coke, thought the concept could be expanded more and told him, "Well, if I could do something for everybody in the world, it would not be to buy them a Coke. . . . I'd buy everyone a home first and share with them in peace and love." Whatever the origin, the lyrics came together quickly. Cook and Greenaway partially completed the music in 1970 for another campaign under the title "Mom, True Love, and Apple Pie." Adapted for Coca-Cola,  it  highlights the connection between the product and a sense of nostalgia embodied in the song's wistful longing for simpler times and "peace and love."


Frickin’ hippies, am I right?


Well, Backer loved the sentiment and with the creative team they began to write the lyrics and adapt it to Cook’s and Greenaway’s music. Over the course of the next few days, they finished the song and not long afterwards the New Seekers recorded it and it was released on Feb. 12, 1971. 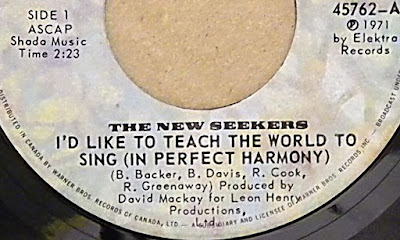 Coke admits that their bottlers were not particularly excited about the song, which is not surprising because they were largely stodgy old businessmen, but Davis’ contacts in the radio industry reported great excitement among their listeners and they suggested that the jingle be released as a single.


In the meantime, work on the iconic commercial began. At first, the commercial was to be filmed on a Dover Cliffside with a few hundred British schoolchildren and 65 “principles” slated for the lip synching duties. British weather, however, as Backer learned during his layover in Ireland due to the London fog, proved problematic with several days of rain. Consequently, the whole production was moved to Italy. Rather than school children from one country, 500 young people from all over the world were cast. The rain, however, proved as troublesome in Italy as it did in England and the delay in shooting caused cost overruns from the $100,000 originally budgeted to $250,000 ($633,508.64 to $1,583,771.60 respectively in 2019 dollars). The commercial was first aired in the United States in July 1971 and the impact was immediate. The commercial and the song captured the spirit of the times and connected with consumers on an almost spiritual level. 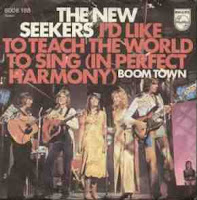 Production on the single was moving forward, but The New Seekers were reportedly too busy to record, so McCann Erickson turned it over to a session group who dubbed themselves The Hillside Singers to identify more closely with the TV commercial. Once their version of the song was released, it hit the charts fast. Two weeks later, Billy Davis persuaded The New Seekers’ to record their version of the song. Billboard reports The New Seekers version of the song peaked at number 7 on the Billboard Hot 100 on Jan. 15, 1972. The same week, The Hillside Singers’ version hit its highest chart position at number 13. Coca-Cola, in agreement with the songwriters and publishers, donated the initial $80,000 in royalties to UNICEF ($506,806.91 in 2019 dollars).


In 2015, the finale of the AMC TV series Mad Men brought the commercial back into the public conscious, and deservedly so. Commercials are often overlooked as the most ephemeral of film media, but as we can see in the 1971 Keep America Beautiful PSA, the 1971 Radio Free Europe PSA, and the 1966 CBS Seasons Greetings: Animation by R.O. Blechman, all previously reviewed on Aeolus 13 Umbra, they can also raise the format from a crass attempt for consumer dollars to communicate larger ideas of community responsibility, democracy, kindness to animals, and, in this case, kindness to our fellow human beings.


It’s a lesson we should always be reminded of.

Posted by G. Jack Urso at 6:46 AM
Email ThisBlogThis!Share to TwitterShare to FacebookShare to Pinterest