“Existence is random. Has no pattern save what we imagine after staring at it for too long. No meaning save what we choose to impose. This rudderless world is not shaped by vague metaphysical forces. It is not God who kills the children. Not fate that butchers them or destiny that feeds them to the dogs. It’s us. Only us.”

Rorschach — The Watchmen, by Alan Moore
﻿

Arthur John Shawcross, also known as the Genesee River Killer, was convicted of murdering 11 women, nearly all prostitutes, in or near Rochester, New York, between March 1988 and December 1989. An emotionally stunted and seriously disturbed individual, Shawcross delved the depths of human depravity, reportedly engaging in necrophilia and cannibalism with his victims’ bodies.


I landed in Rochester the summer after I graduated college with an eye towards a career in radio or TV. While I searched for a job, I took a very small one-room apartment in a seedy former hotel called the Normandie Brownstone, 253 Alexander Street, whose best days were likely before World War II. Likewise, many of its denizens seemed to be a motley crew whose own best days were either behind them or never within reach.


Welcome to the Hotel California


I rented room 328 in the Normandie. While some reports put Shawcross in room 316, according to Misbegotten Son by Jack Olsen, he actually lived in the building next door during the time I lived there. Olsen’s reporting seems solid, so I am inclined to believe his account, though at the time I assumed Shawcross lived in the Normandie since I often saw him there.  The parole department moved him around a couple addresses in Rochester, so Shawcross likely stayed at the Normandie and then moved next door at some point before I moved in.


I would sometimes see Shawcross riding a little girl’s bicycle. It was a light blue Schwinn with a white basket with little plastic flowers fastened to the high-rise handlebars. I didn't know him by name, but a large, overweight, middle-aged man riding around on a child's bike was an unforgettable, surreal vision. I can still see him in my mind all these years later, as clear as if it were yesterday, peddling past the Normandie with a stare fixed straight ahead, as oblivious to the world around him as the world was of him. “My God, man,” I recall thinking, “have you no self-respect?”


In two separate incidents in 1972, Arthur Shawcross raped and murdered a ten year old boy and an eight year old girl in in Watertown, N.Y. After his release in 1987, he was shuttled between a couple upstate New York hill towns, Delhi and Fleischmanns. In each place he was driven out once local authorities discovered the nature of his crimes.  Eventually, Shawcross was transferred by his parole officer to Rochester where he would resume his grisly ways. His body count totaled 11 confirmed kills, and at least one more for which he was not convicted. Due to the usual location of the bodies, he was dubbed by the media as “the Genesee River Killer.”


My third floor room at the Normandie was above a bar and across from the city’s busiest hospital. The bathroom looked unchanged since the 1940s. A single bed, small dresser, a desk, and a chair, constituted my furnishings. The utilitarian beige wall-to-wall carpeting had a greasy feel to it that was disturbing to walk on barefoot. I brought with me a small  black and white television with a 6-inch screen that picked up three or four stations; I turned it on mostly for the company of other human voices.
At night, the creak of the ceiling fan, the glare of neon, TVs blaring loudly through too-thin walls, the ambulance sirens every 10 minutes, and the fights outside the bar combined into an aesthetic chaos. I can recall leaning up against the window in my room, staring out over the parking lot towards the apartment building where Shawcross lived, wondering how my life ended up like the punch line in a bad film noir movie.

Close Encounters of the Null Kind


I found a part-time job at a t-shirt shop to pay the bills while I managed to wrangle an interview from nearly every radio and TV station within city limits — and gloriously failing every one. Escaping the claustrophobia of my small room, and the increasingly bitter disappointment of my job search, I ritually roamed the downtown city streets on a daily basis.


The area I lived in had a gray, sterile quality to it, at least to me. Alexander Street was a busy downtown thoroughfare. While some side streets still had a tree-lined, residential quality to them, the encroaching grayness was like a coronary disease spreading along the city’s circulatory system. Tracy Chapman’s song “Fast Car,” which was played ubiquitously that year, told a tale of escaping poverty and hopelessness that somehow seemed apropos of where I lived. Indeed, it could have been the Normandie’s theme song.


Only partly employed, I had a lot of time on my hands. Anchoring one end of my daily walks was the Midtown Mall, where I spent many hours window shopping, looking at books, browsing the racks at Camelot Music, or scoring a cheap meal before heading back to the Normandie.


According to reports, one of Shawcross' victims, June Stotts, a young woman with developmental problems who sometimes lived off the streets, was a daily fixture at the Midtown Mall’s food court.  How often, I wonder, did I while away a late afternoon day just feet from Stotts, totally oblivious of her vulnerability?


Shawcross, however, had a sixth sense for identifying such vulnerable people. He is known to have killed two women in Rochester prior to my arrival, but, as I recall, there was no idea in the summer and fall of 1988 that a serial killer was prowling the streets. As I wandered the city streets, so too did Shawcross, and his victims, and thousands of others; each of us engaged in some form of hunting and gathering. As it was with our ancestors on the dusty, ancient African plains, predators still walk amongst us, seeking out the weak, the infirmed, the lost — stragglers the herd won’t miss and can survive without.


I never spoke to Shawcross, but I saw him from time to time. I knew absolutely no one, so any familiar face stood out. I still remember the people I ran into on a daily basis — the drunk in the apartment next door, the young couple on the other side, the guy who played chess, the old woman at the laundromat, the coke-head who ran the head shop, and the strange, fat man with graying hair who rode a little girl’s bicycle.


I saw Rochester as a dead-end, both professionally and personally, and by Thanksgiving of 1988 I moved to Albany. Within a month I landed that radio job I longed for and soon Rochester was a distant memory.


Karma is a Ditch


When Shawcross was arrested in 1990 as the Genesee River Killer, I thought he looked familiar, but wrote it off as an overactive imagination. I considered my time in Rochester as my own little journey through purgatory. It wasn’t until many years later that I discovered Shawcross’ connection to the Normandie and realized that he was the strange, fat man with graying hair who rode a little girl’s bicycle.


A little over a year before I went to Rochester, in the Spring of 1987, on a short break from college, I visited my mother in Delhi, NY. Small and insular, the big gossip when I arrived concerned an ex-con who had recently moved to town. They nervously pointed out where he lived and warned everyone.


Not long after I returned to school, my mother called to tell me they drove the ex-con out of town. For my mother and myself, being city folk, the thought of torch-bearing townies driving some guy who paid his debt to society out of town was small town ignorance personified.


Years later, while thumbing through Misbegotten Son, I discovered that the ex-convict driven out of Delhi that Spring of 1987 was none other than Arthur Shawcross himself.


Well, score one for torch-bearing townies.

Reportedly, the Delhi police were aware Shawcross served time for the murder of two children, which led to his being driven out of not only Delhi, but nearby Fleischmanns as well. Learning their lesson, the parole department sent Shawcross to Rochester, this time without notifying the local authorities. Under the radar of the police, and largely forgotten by parole, Shawcross quickly descended into a nightmare of rape, torture, murder, cannibalism, and necrophilia.


Shawcross was captured in 1990, tried and convicted, and then sent to the Sullivan Correctional Facility in Fallsburg, New York. On November 10, 2008, after reporting a pain in his leg, Shawcross was transported to the Albany Medical Center, not far from my home, where he died of a heart attack that evening. My birthday, coincidently, is November 11.
I didn’t know Shawcross, but in a tangential way somehow my life intersected with his twice. It took me twenty years to piece this story together, and I wonder how many other stories are we unaware of in our lives? How would our lives be different if we knew the truth of all these connections?


The classic 1960 Twilight Zone episode “The Monsters are Due on Maple Street,” where neighbors turn against each other out of paranoia, is a cautionary tale warning us that the greatest threat to our communities, and ourselves individually, lay within us — that we are our own greatest enemy and the only thing we have to fear is fear itself.


Sometimes, however, there are things in the world to fear besides just fear itself. Sometimes, the monsters on Maple Street really are monsters — and sometimes they’re on Alexander Street. 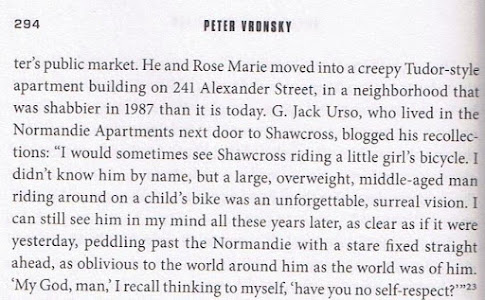