Come in. Welcome. I’m E.G. Marshall. Welcome to the sound of suspense. The fear you can hear. For the next 52 minutes, we’re going to take you into the world of mystery. Into the world of terrifying imagination.
— Opening narration to the CBS Radio Mystery Theater 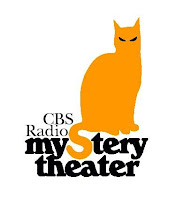 Born in 1964, I came along after radio dramas had given way to television. As a kid, my parents often waxed nostalgic about the good old days of radio, curled up on the parlor floor and listening to The Shadow, Little Orphan Annie, Gunsmoke, Superman, and Inner Sanctum Mystery. For myself, having been nurtured by color television and FOUR channels, I rolled my eyes whenever I had to endure their reminiscing about REAL entertainment and “not that crap we watch on TV” with the same patience one might show to a particularly dull-witted friend.

Not long after it began in 1974, my mother began listening to the CBS Radio Mystery Theater. It played locally weeknights on WGY 810-AM. Despite my initial reluctance to go down the entertainment hierarchy (film, TV, radio, books, newspapers, and cave drawings), I soon found myself enthralled by the tales of horror and murder with eerie music and special effects that supported performances by some of the era’s — and any era’s — finest actors from stage and screen, including some veteran radio performers enjoying one last moment in front of the mic. 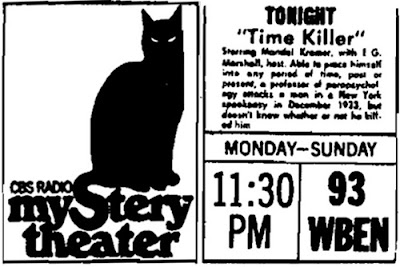 For one reason or another, my mother and I were often the only ones home when it aired and it became something of a special ritual for us. She regressed into an almost childlike state of anticipation and suspense. Often, we spoke —  not as parent and child, but as two fans. She would tell me who the performers were, such as Fred Gwynne, Herman Munster himself, who starred in 82 episodes, and Agnes Moorehead, Endora on Bewitched, who appeared in two early first season episodes. As my parents’ marriage was breaking up, and my mother and I spending more time together as a result, the show became something of a shared escape for the both of us.

Producer Himan Brown was a long-time radio veteran with over 30,000 shows to his credit (The Washington Post, "Himan Brown; Produced 'Dick Tracy', other radio hits," June 8, 2010). Frequent contributor Sam Dann wrote 311 scripts and appeared in 438 episodes as a performer. The budget for every CBS Radio Mystery Theater episode was $30,320 ($154,975 in 2018) with a new one produced every two days (National Public Radio Archives, CBS Press Release, 1974; On the Air: The Encyclopedia of Old-Time Radio, John Dunning).

Despite being a then-modern day incarnation of a classic radio format, Brown's sensibilities were squarely, and I do mean squarely, set in an age before the equal rights era. The show was not above being critical about the "liberality of our times" and "women's lib," as in the opening narration to the episode “The Picture of Dorian Gray.” Also, African-Americans and other people of color were seldom included in storylines, or the cast. The show, however, had an appeal beyond the “radio generation” of people who grew up from the 1930s to 1950s and maintains a fan base of Baby Boomers who, like me, grew up listening to it with their parents.

The CBS Radio Mystery Theater expanded its programming to include other genres, such as classic literature, science fiction, history, and holiday classics like A Christmas Carol and Dracula. Writers were paid $350 per script and actors were paid union scale, $73.92 (approximately $1,788.97 and $377.83 respectively as of 2018). Nevertheless, the series attracted some of the most notable actors of the day — not only the aforementioned Fred Gwynne and Agnes Moorehead, but also Richard Widmark, Joseph Campanella, Mason Adams, Kevin McCarthy, Jerry Orbach, John Forsythe, Celeste Holm, Kim Hunter, Keir Dullea, and Tony Roberts. Up-and-coming talents including John Lithgow, Morgan Fairchild, Mandy Patinkin, and Sarah Jessica Parker also made appearances.
Posted by G. Jack Urso at 11:56 PM 6 comments:
Email ThisBlogThis!Share to TwitterShare to FacebookShare to Pinterest
Newer Posts Older Posts Home
Subscribe to: Posts (Atom)