Green Grass and Rainbows: The Murder of Doreen Gaul, November 1969 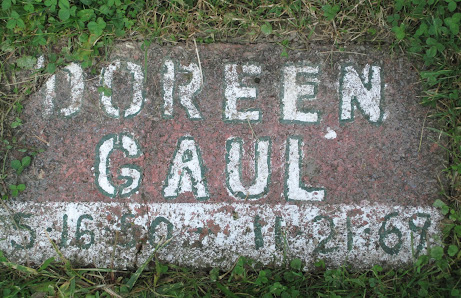 The picture is of a hand-painted paving stone (posted here with her permission). Note the date of death is incorrect. The marker was not there when I first visited in July, but when I received this image I returned to see if I had missed something. I did not, but I did find a square-shaped indentation in the soil right where the person who sent it to me said it would be.
That the stone was no longer there is not surprising. Cemeteries have very strict rules about what kind of markers and memorials can be left at a grave and how long they can remain. Additionally, as Gaul herself is not actually buried there, leaving it would be to perpetuate misinformation.
Finally, as historians, amateur or professional, we must respect the final resting places of those we encounter in our research. Cases like Gaul’s can attract unwelcomed attention to surviving family members and we must respect their privacy.
Nevertheless, that someone was so moved to take the time to create this hand-painted memorial shows how deeply this tragedy continues to affect people over fifty years later.
●             ●             ●
Posted by G. Jack Urso at 3:05 PM
Email ThisBlogThis!Share to TwitterShare to FacebookShare to Pinterest