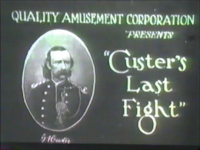 Since childhood, the Battle of the Little Bighorn has fascinated me. Few incidents so capture the character and turbulent history of late 19th Century America as this singular event.  George Armstrong Custer was a more complicated figure than the two-dimensional hero or villain he has been made out to be. Before West Point, he taught elementary school. Once securing his appointment to the vaunted military academy, Custer did just about everything he could do to land at the bottom of his class. Despite graduating a year early because of the war, Custer nearly missed the First Battle of Bull Run after being court martialed for allowing a fight between cadets to take place on his watch as Officer of the Guard. When offered the choice between the safer route of training soldiers or the more dangerous one of fighting, Custer opted to fight.


While Col. Joshua Lawrence Chamberlain and his Maine regiment get most of the glory for saving the Union at the Battle of Gettysburg, Custer arguably deserves a very large portion of the credit. Leading his Michigan regiments against J.E.B. Stuart’s Confederate cavalry, Custer stopped the column before an attack on the Union’s rear lines which would have collapsed the Union army had it succeeded — and despite Chamberlain’s success on Little Round Top. Had the Union Army been routed that day the war would have certainly been lost. Few in our nation's history can be said to have very literally saved it, and Custer is one of those few

Although he was wounded in the foot at the Battle of Culpeper Court House, Custer generally avoided serious injury during the Civil War — "Custer's Luck," as it was called. Nevertheless, he did not walk away from the conflict entirely unscathed. Custer developed a stammer and a compulsive hand-washing habit — perhaps symptomatic of post-traumatic stress having fought for four years and having been burdened with so much responsibility at so young an age as 23.


Custer was a mass of contradictions regarding race. Though against the institution of slavery, and reportedly having had sexual relations with his female black cook, he wrote in October 1865 that, regarding giving the African-American the right to vote, “I would as soon think of elevating an Indian chief to the popedom of Rome.”


While promoted to major general of volunteers during the Civil War, by the end of the conflict Custer was still just a captain in the regular army. He turned down a promotion to colonel of the African-American 10th Cavalry regiment in favor of being the lieutenant colonel of the all-white 7th Cavalry. Custer’s desire was for battle, and he was convinced African-American regiments would not be on the front-lines and therefore his long-term chances for promotion diminished. That being said, other white officers openly embraced the opportunity to serve with and lead the 10th, including First Lieutenant, later General, John J. Pershing, from 1895 – 1897, so one cannot entirely dismiss the charge of racism from Custer's response.


Custer acknowledged a sympathy towards the plight of the Native American, and, indeed, stated that if he were an Indian he would be out living free on the plains rather than on a reservation. Additionally, he had a Cheyanne mistress, Me-o-tzi, and also protested the Indian Agents’ treatment of the natives under their charge; nevertheless, when the opportunity came to advance his career by attacking settlements full of women, children, and the elderly (as at Washita and the Little Bighorn), Custer did not hesitate.


Having visited the Little Bighorn Battlefield myself, I was struck by how remote it is — nearly as much it was in 1876. It was a long way to go to be brutally cut down by people justifiably defending their families and way of life. What Custer realized about the truth of his life in those final moments will never be revealed, but he faced his karma and met it head on. Still, as Sitting Bull commented, “Custer was a fool and rode to his death.” Between those two extremes we find the character of the man, and the nation. May our country live long enough to avoid both fates.


The videos below from my personal archives provide a broad review of various aspects of the Battle of the Little Bighorn. Tracking down these films required no small amount of time, effort, and money. Some of these films had never before been made publicly available before being posted to the Aeolus 13 Umbra YouTube channel. In my research on the battle I looked at a lot of videos and these are among the most compelling. For more related content on Aeolus 13 Umbra, please visit my historical essay, The Mystery of the Little Bighorn Battlefield (with original battlefield photographs).

Custer’s Last Fight (1912), New York Motion Picture Company. Silent Film, 43 minutes (VHS). Directed by Thomas Ince and starring Francis Ford, legendary director John Ford’s older brother, stars as George Armstrong Custer. The New York Motion Picture Company claimed Natives Americans who fought at the Little Bighorn appear in the film. The budget was US$30,000, approximately US$749,344 in 2017, which was the largest to have been spent on a movie at that time.


Red Sunday (1976), produced by the Montana and North Dakota historical societies' Bicentennial commissions. Documentary, 30 minutes (VHS): I viewed a lot of documentaries about the Battle of the Little Bighorn during my research, and this is among the best. The combination of the writing, editing, use of film, and John McIntyre's compelling narration combine for a dramatic and powerful effect in this production.

The Court Martial of George Armstrong Custer (1977), NBC. TV movie, 95 minutes (VHS): Starring Brian Keith, Ken Howard, Blythe Danner, James Olson, William Daniels, and Anthony Zerbe. What if Custer had lived? This question forms the basis of this compelling production. This is a particularly personal film for me as I recall watching it in 1977 as a 12-year old boy with my father who explained it to me as I watched – and launched a lifetime of interest in the battle. The video quality is not great, but the "what if" premise and a fantastic cast makes it worth a visit for those interested in the Battle of the Little Bighorn.

History Recovered: The Custer Battlefield Archeological Survey of 1984 (1985), Webster Productions. Documentary, 58 minutes (VHS): Video companion to the book, Archeological Insights Into The Custer Battle: An Assessment of the 1984 Field Season (1987). Narrated by Dick Cavett. In 1983, a fire swept through the Little Bighorn Battlefield burning off a century of vegetation and offering an opportunity for the best look at artifacts up to that time.

Songs of the Seventh Calvary (1989), released by The Bismarck Tribune for the benefit of the Fort Abraham Lincoln Foundation. Album, 34 minutes (CD). These classic 19th Century songs were sung by the Seventh Cavalry during the Custer era, including some, such as Little Footsteps, sung to Custer on the eve of the Little Bighorn battle. The complete playlist features When Johnny Comes Marching Home, The Girl I Left Behind, Shenandoah-Across the Wide Missouri, Soldier’s Joy, Good-bye at the Door, Arkansas Traveler, Gary Owen, The Dreary Black Hills, Civil War Medley, Captain Jinks of the Horse Marines, Little Footsteps, and Annie Laurie. Click on link above for full article.

Custer’s Last Trooper (1990), Bill Armstrong Productions. Documentary, 48 Minutes (VHS). An archeological dig uncovers a 7th Cavalryman’s skull, and scientists, using modern forensic techniques, recreate his face. I caught this when it was first broadcast on the Arts & Entertainment Channel (A&E) in late January 1990. After high school, college, and striking out on my own, I had almost forgotten about my youthful interest in the Battle of the Little Bighorn, but within an hour it was rekindled with a passion. By May 1, I journeyed across America to the battlefield.


Son of the Morning Star (1991), ABC. TV movie, 180 minutes (VHS). Based on Evan S. Connell’s 1984 book of the same name. Stars Gary Cole, Rosanna Arquette, Rodney A. Grant, David Strathairn, Dean Stockwell, and Buffy Sainte-Marie. Attention to detail and accuracy mark this production. Cole turns in a surprisingly good performance as Custer – capturing his ambition, intensity, and impetuosity, if not necessarily his charisma. Originally broadcast as a two-part miniseries, it is presented here as a single film.