settling for an existence

of acid, grass, and Quaaludes

Posted by G. Jack Urso at 2:58 PM 2 comments:
Email ThisBlogThis!Share to TwitterShare to FacebookShare to Pinterest

A Liberal in the Land of Canaan 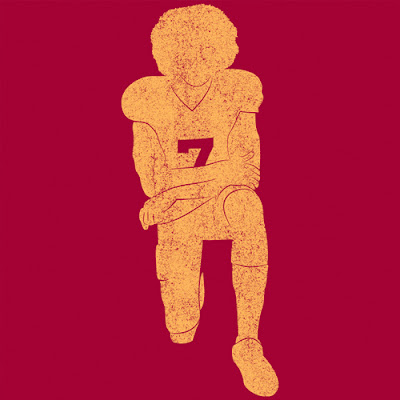 All the debate about standing up or kneeling for the national anthem might lead one to believe that it is a fairly recent phenomenon, but it is an old, time-honored tradition of protest.
I recall an incident in 1986 at Houghton College, the Conservative Evangelical Christian institution of higher education I attended. I was protesting Selective Service and the 1982 Solomon Amendment to Selective Service which denies college financial aid (loans and grants) to males who do not register for Selective Service by the age of 24. While one may say it was the young men’s own fault for not registering, I ask you — when was the last time you saw an ad on TV or in the paper or a magazine, heard a PSA, or saw a poster at a school or post office promoting it?
The Solomon Amendment was finally repealed in December 2020, but only after a generation of young men who failed to register for Selective Service for 38 years were denied financial aid. Typically, these were drop-outs who only learned of the requirement after they got their lives on track and applied to college.
I had already protested Selective Service earlier in the year in the chapel during a talent show when the college’s resident cover band, The Pledge, for whom I played bass, performed “Johnny B. Good.” As we walked off after the song, I grabbed the lead singer’s microphone and asked, “Ronald Regan says the Selective Service is not the draft, but a list. A list for what? In case we’re invited to his birthday party?”
A mild protest by any stretch of the imagination, but it initiated a quick response, including a chorus of “Oooooos,” “Boos,” and a few hisses. One young theology major in charge of the audio board nearly impaled himself running back to the board to shut off the mic. I actually liked the guy and regretted putting him in that position, but I was a young man with long hair and on a mission. I was not to be denied.
Then, later in 1986, a Canadian basketball team played our school. I stood for their national anthem and pointedly sat down during the U.S. anthem, furthering my protest against the Selective Service. I was in the front row on the top tier of the gym overlooking the court, so it was pretty obvious as well. Predictably, I got some dirty looks, but no one said anything to me. It was a silent protest and I said nothing.
The Resident Director of my dorm approached me in the bathroom after the game and asked why I didn’t stand up. While I had a political reason, I choose not to offer it. Instead, I asked him a few questions.
"Do I have to?"
"No," the RD responded, "but it’s respectful."
“OK, so it’s not a rule. Will it affect my grades if I don't?"
"No."
"Will I get kicked out of the dorm if I don't?"
"No."
"Will I get kicked out of school if I don't?"
"No."
"Then what exactly is the problem?" I asked.
"Some people found it offensive," he said.
I thought a moment as I stood in front of the urinal trying to concentrate on why I was there.
“Well, I’m standing up now. Want to invite everybody in and we’ll bang out a verse?”
The RD sighed deeply, knowing he was getting nowhere with me.
As he turned to leave and opened the door, I shouted so everyone could hear.
“Hey! All employees must wash their hands!”