Suicide of the Superhero: The Loss of a Hero

In 2014, I wrote a research paper on Logan’s Run, Beyond the Dome: A Critical Analysis of Logan’s Run, comparing elements of the novels, film, and TV series, and posted it to this blog. I’m a bit of a sci-fi fan and have written numerous articles on a variety of books, films, and TV series as an exercise in writing reviews. Almost from the start, the article took off, gaining thousands of individual page views and remained among the top 10 blog posts every week for almost six years.
Dale Pople was one of those who stopped by to read the article. He was a HUGE Logan’s Run fan who ran a tribute site. I joined and we exchanged thoughts on the film and promoting it, lobbying Mego to release a Logan’s Run line of figures, video making (we used the same software), etc. A big, bald-headed, gregarious guy, Pople had a smile that lit up a room. He actually was a superhero — dressed up in costume and hit the streets looking to help those in need. Active on social media, he gave encouragement to his fellow fans and took the time to connect with many on a personal level, as much as social media allows.
On July 18, 2020, Dale Pople took his own life.
Briefly a pro-wrestler whose persona was named “Superhero,” Pople’s career was cut early by an injury. A navy vet, he also completed police academy training, though he never served. In 1998, Pople took to the streets as the costumed superhero named — Superhero! An early member of the Real-Life Superhero community (RLSH), Pople put on the costume and walked the streets looking for people to help, and he did. A short award-wining documentary, Portrait of a Superhero: A Documentary Film (2018), revealed his troubled childhood and detailed his adventures as “He helps the homeless, provides charity to sick and disadvantaged children, aids stranded motorists, and patrols the streets to prevent crime.”
I found the documentary inspiring and considered asking Pople if I could get a glossy 8 x 10 autographed photo to hang on the wall next to the ones I had of William Shatner, Adam West, and Burt Ward, who I met at the New York Comic Con, but never got around to it. There’s always time I thought.
In 2018, Pople hung up his tights when he turned 50. As he reported to the Tampa Bay Times, Sep. 24, 2018, despite his 6-ft, 220 lb frame, bad knees, hernia surgeries, and shoulder injuries were affecting him. "I don't care how good of shape you are in," he is quoted. "You are not going to break up a fight between 21-year-old kids at 50.”
Nevertheless, he remained a superhero to many. Pople had most recently worked as a salesman and a personal trainer. He had a 25-year career in broadcasting in various technical positions, including about 18 years at one cable network, which seems to have come to an end in 2018, according to his LinkedIn profile. On July 15, 2020, Pople announced he and his wife decided to get divorced, a situation he describes as having been "thrust" upon him. He then adds, "the other decision I made is a choice," without saying what that was. In retrospect, it is likely he had already made up his mind about ending his life. Two careers coming to a close in the same year, followed by the end of his marriage, must have been one hit too many.
Tony Armer, director of Portrait of a Superhero (see video, below), confirmed Pople’s suicide and reported that he “struggled with depression for most of his life.” We’d all be lying if we say we didn’t experience dark hours of desperation ourselves.
Pople‘s last post on July 18 is a short video of him wearing the red shirt from his Superhero costume. The description says: “Check please. To quote Herman Goering when he was caught, ‘I can’t complain I had a good run.’” In the video itself, Pople is reflective and quotes George Reeves, the 1950s TV Superman, who said ‘Welcome to the bottom of the barrel boys, but don’t worry, I got the check.’” It is worth noting that both Göering and Reeves committed suicide. Pople muses, “There was a time when I really wasn't too comfortable being Superhero,” but concludes “He was all I was really good at being anyway.” He gives a nervous, ironic laugh; his face is flushed and the smile tight. Nevertheless, the video strikes an optimist note at the end as he points to the camera and gives his Superhero character motto, “You know what to do!” — To encourage us all to do the right thing.
One commentator on the video asked if Pople was doing ok, and he responded, “Better than Ever.” Pople took his life later the same day. It has been said that those who give so much for others often have little left for themselves. Maybe that was the case with Pople, but who knows? The loss of his broadcasting career, the end of his superhero career, the dissolution of his marriage, and the social isolation of living in Florida during a pandemic must have been a very difficult time. I can only imagine though.﻿
One day, after nearly six years of my article on Logan’s Run being on my blog’s weekly Top 10, it suddenly dropped off the list.
The date was July 18. The day Dale Pople ended his journey on this planet.
I wish I asked him for that autograph.
­­­­­­­­­­­­­­­­­­­­­_______________________________________________________
Here is the full 15-minute documentary about Dale Pople on YouTube: 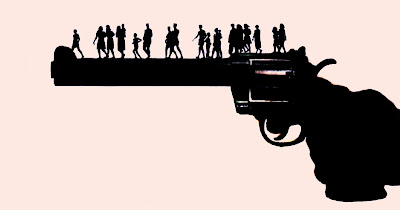 We have a warrant


It says to freeze


Down on your knees

We shoot them in the streets


We shoot them on sight


We shoot them in the dark


And in the broad daylight

We shoot them when their hands are up


We shoot them when they’re down


We shoot them standing up


We shoot them on the ground

We shoot them if they’re proud


We shoot them if they’re brave


We turn the cameras off


And say they misbehaved

We shoot them if they’re young or old


We shoot them if they’re gay


We shoot them when they’re standing up


And when they run away

We shoot them in their homes


We shoot them in their bed


We shoot them while they’re dreaming

We shoot them going out for dinner


And while they're eating ice cream


We shoot them during traffic stops


And remember them in memes

We shoot them on their feet


And force them to their knees


We strangle them until they say

They ask for help


From their neighbors and the law


But the president calls them "Sons of Bitches"


For protesting it all


And let them rest


It’s what we do the best

Author’s Note: This is the original version of the free verse poem I wrote “The Facts Are Plain.”