In Search of . . . The Complete First Season


This series presents information based in part on theory and conjecture. The producer’s purpose is to suggest some possible explanations, but not necessarily the only ones to the mysteries we will examine. — Opening Narration to In Search Of . . . 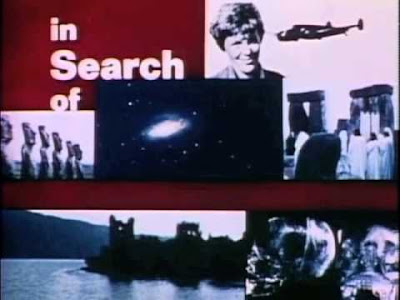 1970s pop culture was a bubbling cauldron of conspiracy theories, pseudo-science, New Age spiritualism, and purported paranormal phenomenon. For anyone interested in that era, no TV program explores these mysteries better than the classic television documentary series In Search of . . . , which ran from 1977 to 1982, narrated by Leonard Nimoy and produced by Alan Landsburg. The entire first season is available for viewing on my YouTube channel. See links below.


Over the course of four hour-long specials and 144 half-hour syndicated episodes, In Search of . . . explored just about every far-out idea ever to come out of the 1960s and 1970s. Then-popular theories about ancient astronauts, talking to plants, killer bees, Bigfoot, the Loch Ness Monster, Dracula, Nazis, Amelia Earhart, E.S.P., Atlantis, the Bermuda Triangle, and more, were all treated as serious phenomenon. In most episodes, In Search of . . . is explanatory in its approach to these topics rather than investigative, so if something sounds preposterous and unbelievable the producers leave it to the audience to make up their own minds.


Extraterrestrials, Magic & Witchcraft, Missing Persons, Myths & Monsters, Lost Civilizations, Special Phenomena.
— Teaser/Tag to In Search Of . . .
Despite the sensational nature of the show, In Search of . . . did produce a number of excellent scholarly programs, some of which are included in the first season episodes presented below. The episodes on Incan treasure, killer bees, and the historical Dracula are some of the stand-out episodes in this regard. Nevertheless, the more fantastical episodes on so-called ancient astronauts, Atlantis, the Bermuda Triangle, etc., give credence to myths without any substantive evidence to back it up. It is particularly displeasing to see the ancient astronaut theory continue to be promulgated today. Wild-haired experts with dubious academic credentials, or none at all, have found fame on cable networks hawking preposterous theories that have long been discredited. All this does is to steal the honor due to the ancient cultures who devised the technology and put money into the pockets of people who can only be described as charlatans.


Nevertheless, I have a real fondness for In Search of . . . . Whether real history and science or just unfounded speculation, the episodes are always compelling entertainment to watch. Part of it is the excellent writing and Nimoy’s basso profundo narration, but also the film production values are outstanding and the music by W. Michael Lewis and Laurin Rinder always strikes the right chord and mood.


The rights to In Search of . . . were lost by the original production company, Alan Landsburg Productions, who let them lapse. Subsequently, the show found its way into the hands of a wider audience. First season episodes were available on YouTube for many years, but a later distributor exercised their right to have them taken down. Nevertheless, the complete series is relatively affordable for fans. Interestingly, the three specials narrated by Rod Serling, who was to be the series narrator until his untimely death at age 50 in 1976, remain available online.
Episode descriptions and links to the first three films (hosted on the Aeolus 13 Umbra YouTube channel), which inspired the In Search of . . . series, are available below.
Posted by G. Jack Urso at 12:19 AM 0 comments
Email ThisBlogThis!Share to TwitterShare to FacebookShare to Pinterest
Newer Posts Older Posts Home
Subscribe to: Posts (Atom)