In Search of . . . The Easter Island Massacre

by G. Jack Urso
In Search of . . . The Easter Island Massacre Episode Teaser
Imagine you live on a planet of water and the only land is a small island on which you and about 10,000 to 15,000 others live. That’s all. No distant lands to discover. No other people with whom to communicate. You are completely and utterly alone in the universe.


That is how the people of Easter Island viewed their world before their first European contact. Indeed, Easter Island is so remote that there was no contact with other Polynesian cultures, perhaps the most able seafaring peoples in the world at the time.


“In Search of . . . The Easter Island Massacre,” is a first season episode of the classic In Search of . . . series, hosted by Leonard Nimoy, which ran from 1977 to 1982. The original air date of this episode is June 15, 1977. While one can find more up-to-date documentaries about Easter Island, this episode highlights some core theories and myths about the islanders and their giant statues, called moai.

The Easter Island moai are thought to represent the islanders’ ancestors whose spiritual energy, called mana, was channeled through the statues’ eyes to bless the people. This explains why the statues, once erected, faced inwards towards the land, rather than out to sea.


The massacre referred to in the title of the episode refers to the wide-scale toppling of the statues off their ahu (stone platforms), presumably after a time of famine when the statues were no longer seen to fulfill their purpose — to ensure good fortune. The collapse of the cult of the moai led to the rise of the birdman cult, which is also touched upon in the episode. Currently, it is not clear that the toppling of the moai can be attributed to any single cause. In addition to religious factors, inter-tribal warfare, earthquakes, and simple neglect may have contributed to the fall of the statues off their platforms.
The ecosystem of Easter Island (indigenously referred to as Rapanui) reportedly collapsed due to overuse of its resources, which has been used as a metaphor for planet Earth and as a warning we should more carefully guard our own natural resources. While that may partially explain some of the troubles that befell Easter Island, recent scholarship suggests that the islanders had been adapting to their changing ecosystem and that the unique culture of Easter Island could have survived intact had it not been for European slavery, the spread of European diseases, and the theft of their land.


Peter Tyson, former Editor-in-Chief of NOVA Online, in the article “The Fate of Easter Island” quotes Jo Anne Van Tilburg, a noted archeologist who worked extensively on Easter Island, calls assertions that Easter Island is a metaphor for planet Earth " . . . a projection of Western values which emphasizes the self-destruction of the Rapanui culture over the actual, near-annihilation of it by contact with the West." 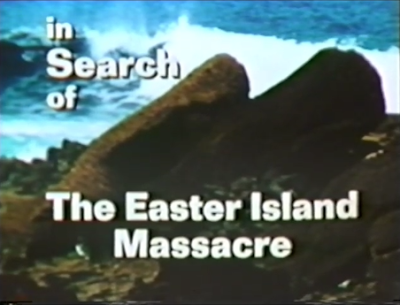 Be that as it may, one can also assert attempts to exonerate the ancient islanders from all culpability in the mismanagement of their resources a projection of Western-guilt. The truth may lie, as it often does, somewhere between the two extremes. Certainly, however, one cannot argue that the West is primarily and almost solely responsible for the near-extinction of the Rapanui. Were it not for our involvement, the culture would not have been decimated nor the secrets to its written language lost to time.


Only time will tell whether drawing an analogy between the fate of Easter Island and that of the planet Earth ultimately stands up to the evidence; however, one can certainly agree that we do hold a couple things in common with the pre-European Rapanui — we have both mismanaged our resources due to over-population and we both think ourselves the only sentient life in the universe.
Note: While once available for viewing online, YouTube now blocks all In Search of . . .  full episode uploads.

Posted by G. Jack Urso at 11:00 AM
Email ThisBlogThis!Share to TwitterShare to FacebookShare to Pinterest