The 1971 Keep America Beautiful public service announcement (PSA), also known as the “Crying Indian” commercial, had a powerful effect on the American public, both young and old. First airing on Earth Day in 1971, the two-time Clio Award-winning campaign created by the Marstellar Inc. ad agency represents a sea change in America on how we treated the environment. Actor William Conrad’s deep, resonant voice and the sorrowful face of a Native American creates an indelible impression, adding to the gravitas of the message. Today, we have little appreciation for how dirty our environment was back in the 1960s. Lax laws and regulations resulted in pollution, smog, litter, poisoned water sources, toxic waste dumps, the use of PCPs in neighborhood electrical transformers, and other similar blights on our environments.


First,  it  should  be  acknowledged that the actor portraying the Native American "Crying Indian" in the PSA is, in fact, Iron Eyes Cody, an Italian American. Born Espera de Corti, Cody had a long career in Hollywood portraying Native Americans and so fully absorbed himself in his role that eventually he wore traditional native garb every day as well as adopting two Native-American children with his wife. Indeed, Cody denied his Italian heritage later in life. This type of cultural appropriation is questionable at best, and in Cody’s case perhaps a sign of senility as he grew older. It also came at a time of an increasing push for Native Rights as with the American Indian Movement (AIM) founded just a few years earlier in 1968. I do not doubt that if Cody’s true ethnic heritage was more widely known at the time AIM would have been less than pleased. From a modern perspective, I have to admit it makes me feel uncomfortable while at the same time still being moved by the PSA and Cody’s understated performance.


It is notable, however, as reported by the Internet Movie Database, in 1995 Cody was recognized by “Hollywood’s Native American Community . . . as a “non-Native” for his contribution to film.” He was also honored with a star on Hollywood Boulevard in 1983. 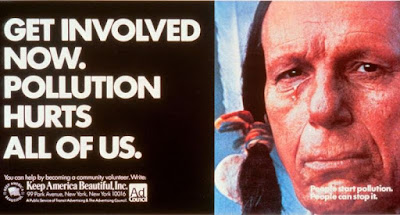 The Keep America Beautiful organization was comprised not of environmental groups, but rather of corporations such as the American Can Co. Owens-Illinois Glass Co., Coca-Cola, and the Dixie Cup Co. Founded in 1953, they espoused a general anti-littering message. Historian Finis Dunaway, professor of history at Trent University, in a Nov. 21, 2017, Chicago Tribune article notes that in the 1970s these companies pushed against proposed “bottle bills” that required beverage producers to use reusable containers, a more costly alternative to using non-recyclable materials, which in turn contributes to the levels of litter shown in the PSA. This would lead to the members of the Keep America Beautiful advisory board, the National Audubon Society and the Sierra Club, leaving the group.


Dunaway further compares the “silent” and “powerless” Native American portrayed by Cody to the more politically active American Indian Movement. The inference here being that the Native American character in his silence is somehow complicit in the perpetuating the white narrative that the native lacks any real power to effect change. I have to completely disagree. From a literary perspective, Cody is more of a silent Greek chorus — wordlessly commenting on the morality of those who pollute the Earth.


Nevertheless, despite the cynicism of Professor Dunaway, according to the Ad Council the "Crying Indian" campaign led to a nearly 88 percent reduction of litter in 300 communities in 38 states as well as in several nations. This PSA had a powerful effect on American Baby Boomers and early Gen Xers. After seeing the commercial, I remember how my friends and I became much more conscious about the effect we, and others, had the environment. When someone driving down our quiet little residential street threw a big bag of garbage out their car window, my childhood friends and I called the police, who came and took a report. We wrote down the license plate number and gave it to the officer who went and had a "chat" with the offender — and returned his bag of garbage.  Small incidents like these and others in the 1970s, multiplied by the millions, owe their inspiration to this PSA. 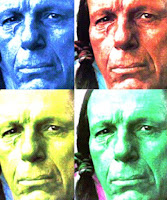 The message of the “Crying Indian” PSA also melded with environmental warnings on other TV shows, such as the 1974 All in the Family episode "Gloria's Shock" when Mike warns Gloria of the hole in the ozone caused by chlorofluorocarbons (CFCs), found in everything from hairspray to deodorant to refrigerators. According to an Apr. 10, 2019, Sierra Club report, this episode so terrified the public (and a 10-year-old me) that sales of these products dropped almost immediately until CFCs were finally banned in the United States in 1978. Environmental messages were also embedded into early/mid-70s Saturday morning children’s shows such as Superfriends, Sealab 2020, Ark II, and many more. The overall effect resulted in a generation of environmental advocates who grew up to be a persistent thorn in the side of corporations who sought to maximize their profits at the expense of the land and our future.


As for Dunaway’s assertion that the agenda of the Keep America Beautiful campaign was really a Trojan Horse effort to forestall bottle bills from being passed, the plan didn't quite succeed. Because of the “Crying Indian” PSA, and other similar efforts in popular culture, as noted above, environmental awareness was dramatically raised. While partially successful in limiting the number of states who passed bottle bills to just eleven, plus one territory (California, Connecticut, Delaware, Hawaii, Iowa, Maine, Massachusetts, Michigan, New York, Oregon, Vermont, and Guam), recycling campaigns spread. Today, schools and offices deploy the ubiquitous blue or green recycling containers and even waste disposal companies provide their customers with a trash can just for single-stream recycling. So, even in those states without bottle bills, aluminum, glass, and plastic containers form a significant part of recyclable materials. Nevertheless, the lack of a nationwide bottle recycling law hampers environmental efforts. While we’ve come far, we still have a long way to go.


The trade publication, Ad Age magazine, named the Keep America Beautiful campaign one of the top one hundred ad campaigns of the twentieth century and it is well-deserved. Nearly fifty years later, the image of the “Crying Indian” has become an iconic American symbol and a persistent, if sometimes ignored, warning of the consequences for mistreating Mother Earth. In its positive effects on the environment, this PSA remains one of the most powerful and successful efforts of its kind.