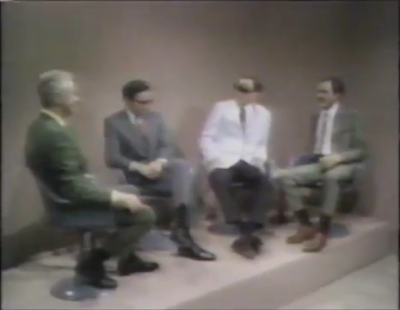 
Bill Moyers, former White House Press Secretary for President Lyndon Johnson and at the time of this broadcast, publisher of Newsday.


Marshall McLuhan, scholar. Author of works on communications theory who predicted the Internet some three decades before its actual invention.


The panel, introduced by ABC News Anchor Frank Reynolds, discusses the motives that sent us to the Moon, providing insight into the social and political dialogues that revolved around the Moon landing in 1969.


McHarg believes the landing on the Moon is an attempt by the West to extend Manifest Destiny into outer space, furthering our relentless political conquest.


Fortunately, the rest of panel sees the Moon landing as an extension of humanity’s curiosity and spirit of exploration. In any event, three astronauts in a craft the size of a large station wagon isn’t exactly a threat to the cosmic integrity of the Moon.


In response to the question whether the space program is a waste of money, Moyer accurately points out that because of the space program America has organized itself to achieve far greater accomplishments than we would have without it. In technology, engineering, education, textiles, computers, transportation, and countless other areas, the space program of the 1960s grew our economy at a time when the nation was embroiled in an unpopular foreign war, a war on poverty, and cultural turmoil that was racial, generational, religious, political, sexual, and social in nature.


Nevertheless, despite all that we still managed to land on the Moon for basically no better reason than it was there — and John F. Kennedy said we should go, so we did.
This clip comes from video tape nearly 20 years old. The video and audio is low-grade. It is presented here as a historical document. This video clip is presented on a non-profit blog that accepts no advertising. As such, it meets the definition for Fair Use as established by the U.S. Copyright Office.
Posted by G. Jack Urso at 8:43 PM
Email ThisBlogThis!Share to TwitterShare to FacebookShare to Pinterest
Labels: Apollo 11, Bill Moyers, Howard K. Smith, Ian McHarg, Marshall McLuhan