Planet of the Apes Film Soundtrack (1968) 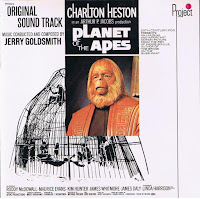 Composer Jerry Goldsmith’s soundtrack for the ground-breaking 1968 film Planet of the Apes is a remarkable, underappreciated work that exemplifies the experimental spirit of the 1960s. The “Main Title” theme immediately establishes a sense of mystery, layers of woodwinds hooting like monkeys, the rattle of sticks, a single chord pounded on the piano. There’s no melody — nothing analogous to the structure of typical movie scores, not to mention epic big budget sci-fi films. No rousing theme to be sold as a single. Here, Goldsmith creates not only an alien landscape, but also a contemplative space. Planet of the Apes poses an existential philosophical question to the audience and Goldsmith’s soundtrack gives the space to contemplate it.


“Earthly mysterious” is a phrase I’ve previously used to describe this album (“Logan’s Run Film Soundtrack,” also scored by Goldsmith), and I think it fits pretty well. The instrumentation feels organic, at times even imitating natural sounds. There’s a tension — even paranoia — in the soundtrack as the mystery unfolds in the film. The score reflects the audience’s journey as the secret to the Planet of the Apes slowly reveals itself. Goldsmith cites Arnold Schoenberg as an influence in his work, and one can hear the avant-garde Austrian composer’s atonal influence on this soundtrack in addition to on parts of Logan’s Run. 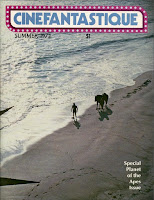 In Cinefantastique’s Planet of the Apes issue (Summer 1972) Goldsmith spoke about the soundtrack, saying, “it should not be an electronic score, not gimmicky, and [I] wanted to do it with a normal orchestra. I did not want to do the obvious on this . . . I was thrilled with it." Goldsmith also notes that at the time of the interview, “the Austrian Ballet is using it in their production of 'Othello'” (37). While Goldsmith does use orchestral elements, he departs from the epic orchestration approach in place of what is a minimalistic and sometimes discordant soundtrack that captures the sense of mystery and danger in the movie. According to Goldsmith, no experimental techniques or “unusual instruments” were used, except perhaps for stainless steel bowls used with the percussion section for the waterfall scene (“The Clothes Snatchers”) and putting the mouthpiece backwards on the French horns, to achieve “that swooshing sound in the desert scenes” (37).


Additionally, in the Cinefantastique article, Goldsmith reported that he used “A Polynesian instrument called ung-lungs . . . used in the cave sequence” (“The Cave”) (37). However, as noted in Celluloid Symphonies: Texts and Contexts in Film Music History (2011), "no such instrument, Polynesian or otherwise, appears to exist" (313). My own research likewise found nothing. Why Goldsmith is tossing out a red herring here is unknown. I can only conjecture that it was perhaps to maintain a professional secret or maybe even as a joke to the still up-and-coming fanzine.


Global rights to the soundtrack were obtained by the International Tape Cartridge Corp. in what was then the first-ever deal that the rights to manufacture the vinyl album and celluloid tape versions of the soundtrack were awarded to a tape cartridge duplicator/distribution company. The soundtrack was released as an LP set, “in all mechanical forms, and both 4-track and 8-track cartridges,” according to Billboard (22 June 1968). The 1968 Project 3 Records release, featured here, has 10 tracks, but a later 1997 release from Varese Sarabande includes nine more tracks from the original motion picture soundtrack.

Goldsmith was a wide-ranging composer with scores to some of the most important and popular film and TV shows of his era. He garnered Academy award nominations not only for Planet of the Apes (1968), but also for Patch of Blue (1965), The Sand Pebbles (1966), and Patton (1970). Goldsmith also scored for other films such as In Harm’s Way (1965), Our Man Flint (1966), Star Trek: The Motion Picture (1979) as well as the themes to the TV shows The Man from U.N.C.L.E. (1964), Room 222 (1969), and The Waltons (1972), among many other examples too numerous to list here. His soundtracks to Logan’s Run and Planet of the Apes represent two avant-garde extremes: the former, ambient and electronic, and the latter, “Earthly mysterious” and organic. Both albums are essential listening for both film score buffs and sci-fi fans — neither will be disappointed.


Listen to the album on the YouTube video above or the individual tracks below.

Posted by G. Jack Urso at 9:07 PM
Email ThisBlogThis!Share to TwitterShare to FacebookShare to Pinterest