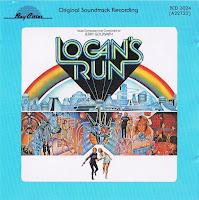 Released along with the film Logan’s Run (1976), the film soundtrack album by Jerry Goldsmith captures the futuristic ambiance of the film. Although it has elements of ambient and electronica music, best heard in such tracks as  The Dome and Love Shop, it doesn’t quite fit neatly into either genre because it is constrainted by the cinematic needs of the film. The lush orchestrations in such tracks as The Monument and the Love Theme from Logan’s Run pull the soundtrack away from pure ambient or electronica. Nevertheless, the soundtrack also displays Goldsmith’s uncanny ability to shift expertly from genre to genre. From the sci-fi soundings of Logan’s Run, to the Earthly mysterious, and sometimes discordant, sound bed to Planet of the Apes, the epic themes for the Star Trek movie franchise, or the country folk music from the theme to The Waltons, Goldsmith was one of the most versatile, if underrated, film composers of his era.


Listen to the album on the YouTube video above or individual tracks by clicking on the links below.
Original Recording Credits:
Music composed and conducted by Jerry Goldsmith.

Related Content
I created the video below set to “The Dome” using Microsoft’s now-defunct Movie Maker, which allowed me to adjust the hue to create color shifts.

An extensive look at the film, novel, and TV versions of Logan’s Run, exploring little known or missed details: Beyond the Dome: A Critical Analysis of Logan’s Run.

Posted by G. Jack Urso at 12:04 AM
Email ThisBlogThis!Share to TwitterShare to FacebookShare to Pinterest