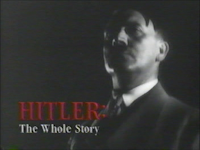 Hitler: The Whole Story (1989, CINE-ART/Munich), is a two and a half hour documentary providing an overview of the life of Adolf Hitler from birth, to his days as a homeless vagrant, his military service, and finally his rise and fall from power as dictator and war monger. Rare footage, including color film shot by Eva Braun, provide a look at Hitler’s private life as well as German life under the Nazis. The complete recording is presented below, a digital copy of a 1989 videotape distributed by the Discovery Channel.


Originally titled Hitler: A Career, this documentary is one of the best reviews of Hitler’s life and provides a focus on the various influences that contributed to his psychological make-up. All too often Hitler is simply dismissed as a “monster,” but he was not. Indeed, his behavior was rooted in very human insecurities; however, that spark of conscience that keeps the devil on our shoulder from having too much say was absent from Hitler's soul. He became a brutal, cruel man who demanded from others what he could not do himself and sought power as a buttress for his own psychologically maladjusted outlook on life.


Segments from Hitler: The Whole Story have previously been featured on Aeolus 13 Umbra and include:
I saw this documentary in early 1990 and it launched a hitherto untapped interest in Hitler and the Nazi regime. While I grew up with a multitude of World War II vets, and was inundated with various epic films on the topic, I did little reading of the conflict apart from my school studies. As an administrator for a local college, I could take books out of the library for an entire semester, and I did so with a vengeance. I poured through all the important biographies of the major Nazi figures, U.S. Army psychological reports, and classic documentary series like The World at War, which, in my opinion, still has yet to be surpassed.


What I find compelling about Hitler is how his life is a study in brutality and irrationality, from the severe beatings at the hands of his father to his genocidal rage as an adult. Hitler, however, remains an enigma for certainly others have been physically abused and homeless, but did not lose their humanity. His career is as much a result of luck and timing as it was fear and brute force. In this documentary we get a glimpse at the complicated mix of events and sociopathy that created Hitler and the Nazi phenomenon.


If Hitler kept his anti-Semitism in check and still pursued a war with the West and Russia it is likely many German Jews and other minorities would have fought in the army, as they did in World War I. In fact, it was a Jewish officer who recommended Hitler for the Iron Cross in the Great War. What we learn in this documentary, however, is that Hitler did not love Germany, or Germans — Aryan or otherwise. In the end, he abandoned them to a fate he engineered. He was so scared of the world that he needed to either mold it to his wishes or destroy it. Indeed, it is this fear of the world, fear of those unlike ourselves, that has driven many to commit heinous acts against humanity — a phenomenon that is played out to this very day.