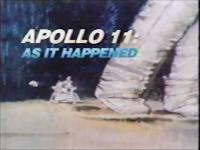 Apollo 11: As It Happened is a six-hour compilation of ABC News coverage of the Apollo 11 launch, Moon landing, and return to Earth, July 16 – 24, 1969. No commercials. No narration. Just six hours of pure, unadulterated news coverage – enough to satisfy even the most hard-core fan of the space program or news junkie. The complete recording is presented below, a digital copy of a VHS videotape recorded in July 1994 from a public television broadcast.


As I was born in 1964, I grew up with the space program and counted astronauts among my first role models and heroes. I can even remember the Moon landing, sort of. I was four years old and my family was vacationing in Wildwood, New Jersey. It was a few minutes before 11 P.M. and I was drifting in and out of sleep when my father abruptly woke me up just in time to see Neil Armstrong walk on the moon – which I did, and immediately fell back to sleep. I'm grateful to count myself among those who watched that day, if but just for a little while.


As an artifact for research, Apollo 11: As It Happened provides source material and insight into a wide variety of areas, including broadcast engineering, computer technology, fashion, and language. Along with interviews of various people, including scientists, celebrities, reporters, authors, artists, and everyday citizens – both young and old and black and white – we get a glimpse at "the State of the Union" in July 1969.


Apollo 11: As It Happened, the complete six-hour recording, is provided below from my personal archives:

Posted by G. Jack Urso at 11:09 AM
Email ThisBlogThis!Share to TwitterShare to FacebookShare to Pinterest
Labels: ABC News, Apollo 11, Apollo 11: As It Happened, Neil Armstrong