JFK Assassination: As It Happened 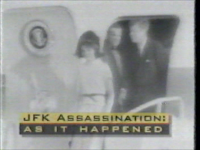 JFK Assassination: As It Happened, is a six hour and fifteen minute NBC news compilation of footage following the assassination of President John. F. Kennedy on November 22, 1963. The program provides raw minute-by-minute coverage beginning just before 2:00 P.M. ET and ending shortly after 8:00 P.M. ET. The viewing experience is very much like a time machine – we are transported back to that day and that time and that moment when many historians argue the turbulent 1960s really began. The complete recording is presented below, a digital copy of a VHS videotape recorded in 1993 from a public television broadcast.


NBC news anchors and correspondents featured include Frank McGee, Bill Ryan, Chet Huntley, David Brinkley, Merrill Mueller, Robert MacNeil, Tom Pettit, Edwin Newman, and John Chancellor. The technology of the times is pushed to limits as engineers frantically switch between studios, film segments, and reporters breathlessly rushing in with the latest breaking news. At a time when cameras where heavy and had vacuum tubes, film had to be developed and then edited and spliced with a razor and tape, and teletype instead of computers, one is amazed at how efficiently the crews got the news on-air.
Segments from JFK Assassination: As It Happened have previously been featured on Aeolus 13 Umbra and include:
I explore the assassination of President Kennedy in depth in the Aeolus 13 Umbra article The Assassination of Lee Harvey Oswald. Growing up in the wake of the assassination, I came to believe that there was a vast conspiracy to kill the president. In fact, in 1990 I began to research the tragedy in order to find documentation to support my preconceived beliefs, yet I discovered just the opposite. While others may have wished Kennedy dead, Oswald was the only assassin and did so out of purely personal reasons, mainly a sociopathic need for narcissistic self-aggrandizement that he hoped would have resulted in a war between the United States and the Soviet Union. Readers, of course, are free to draw their own conclusions; however, in the nearly 25 years since I came to the realization that Oswald acted alone I have encountered no evidence to change my mind. Skeptical readers are invited to read the article above for more information.
JFK Assassination: As It Happened, is presented below in its entirety from my personal archives: