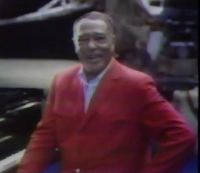 Rarely has an individual as cool and elegant as Duke Ellington ever graced the stage, and this rare clip amply shows that. Ellington makes his self-described television debut as a vocalist in “Moon Maiden,” a piece commissioned by the American Broadcasting Network (ABC) on the occasion of the 1969 Apollo 11 Moon landing.


There is a studio recorded version of “Moon Maiden” available on the album The Intimate Ellington (2006); however, it is much slower, almost a spoken word performance. In this clip, Ellington brings a light, lyrical, jazzy touch to the first-ever public performance of “Moon Maiden.” Ellington’s vocals suit the piece, but don’t quit your day job just yet Duke.
From the Aeolus 13 Umbra YouTube channel.
Also of interest are the full-sized replicas of the Apollo 11 Command Module and Eagle Lunar Lander in the studio. It gives perspective on how small a space the astronauts lived and worked in on their voyage. The ABC news anchor introducing Ellington is Frank Reynolds.

The audio and video quality is relatively low-grade due to the source video tape being nearly twenty years old and recorded off television. Therefore, audiophiles seeking a higher quality recording will be sorely disappointed. I present it here from my own archives as a relic of historical curiosity.