At the height of the Apollo program, NASA considered several plans for space station designs that utilized the technology of the era for long-term orbital platforms. While NASA eventually opted for the Skylab design, this short video clip from ABC News coverage of the 1969 Apollo 11 Moon landing describes an innovative space station design that can be launched in and deployed from a Saturn rocket. Introduced by anchor Tom Jerriel and featuring reporter Bill Owens. 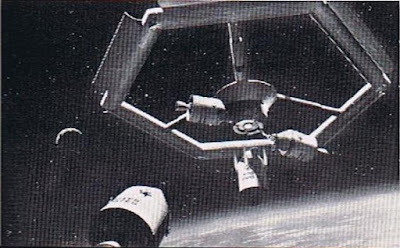 The audio and video quality is relatively low-grade due to the source video tape being nearly twenty years old. Just one of the many obscure videos I recorded off the television over the past three decades.
●             ●             ●