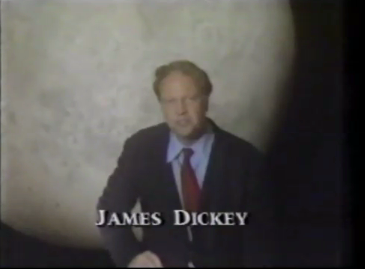 James Dickey, poet and author best known for Deliverance, from which the 1972 film of the same name was made, performed his poem “The Moon Ground" for the American Broadcasting Network (ABC) on the occasion of the Apollo 11 Moon landing. Dickey's spoken word performance of this poem was broadcast in the days following the first moon landing in 1969.

The audio and video quality is relatively low-grade due to the source video tape being nearly twenty years old, and recorded off television. I present it here from my own archives as a relic of historical curiosity.

Posted by G. Jack Urso at 8:06 AM
Email ThisBlogThis!Share to TwitterShare to FacebookShare to Pinterest
Labels: James Dickey