As a sci-fi fan, it would be remiss of me in the final few hours of 2017 not to somehow honor the 40th anniversary of the premier of Star Wars. There is little I can add to the recognition, but I do have one story that perhaps illustrates the power of the phenomenon to those too young to remember a world before George Lucas’ blockbuster movie.


When the film debuted in May 1977, I was not immediately taken with the hype. Star Trek was my main sci-fi interest and I regarded Star Wars as an over-produced, genre-destroying, corporate monster. I waited over a year before finally giving in to peer-pressure and got my dad to take me during one of our weekly divorced-dad weekends in June 1978.


Now, I hasten to add that Star Wars had been playing at our local multiplex, Cine 1-2-3-4-5-6 (yes, that was its name) at Northway Mall in Albany, NY, since May 1977, so it was playing for a full year before I saw it — and the theater was still packed. Let that sink in for a moment. Star Wars played at theaters continuously for over a year. It’s impossible to imagine any film doing the same thing today.
I was looking for any reason not to like the movie. When an imperial officer used the word “sensors” early in the film, I leaned over to my dad and said that was used in Star Trek. My dad shushed me and told me to give it a chance. By the time Luke Skywalker fired up his lightsaber for the first time, I was hooked. As though bound by quantum entanglement, I remain so today. 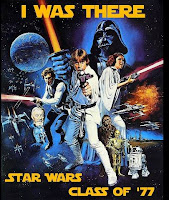 The backstory of an awkward young man with limited prospects who hates his life rang true with a lot of kids, and still does. Luke Skywalker’s coming-of-age is what gives the film its heart and helps it rise above what Alec Guinness described as the “banality” of the dialog in the script. My father, despite being an ex-marine himself, got a bit motion sick during the Death Star run. Nevertheless, having grown up with Buck Rogers and Flash Gordon serials, he recognized the similarities which Lucas used in creating the film’s overall structure. By building on the work of the previous generation, George Lucas created a film that attracted young and old alike.


I walked into the theater a skeptic and walked out into the hot June night a hard-core, rock-solid, Stars Wars fan. I quickly joined the fan club, got the Kenner figures, got the models, got the soundtrack, and got the books. The only books at the time, however, were the novelization of the film (1976) and Splinter of the Mind’s Eye (1978), both by Alan Dean Foster, who also wrote Star Trek Log One, which I cover in another article (see link).
I still have those books (see above). The gold cover of the movie novelization is wrinkled from when my brother and I fought over reading it in 1978. Some pictures later fell out, which I saved and put back. The binding fell apart in the 1990s and it is now held together by electrician’s tape. The dog-eared pages are now yellowed and stained. I took them with me wherever I moved throughout middle school, high school, and college. I probably haven’t read them in 20 to 25 years, but I could no more get rid of them than I could sever a limb or a memory.


With the books came the music. I played the 8-track of John Williams’ soundtrack almost daily. I also got the single with the disco version by Meco. That single was huge and turned up on TV, radio, and in ads. It even helped inspire me during my runs that summer of 1978 (as referenced in my short story “I Now Know Why Salmon Swim Upstream”).While I still have Meco’s singles for The Empire Strikes Back and Return of the Jedi, which I bought at the time of the films’ releases, I long ago lost the 45 for the first film — which brings me to the most interesting part of my tale.
After the divorce in 1978, mom sold the house and we moved into a much smaller brick row house. By the summer of 1980, I was working for my mother’s one-woman cleaning service. She had a number of customers in an exclusive upscale apartment/condominium complex called Oxford Heights. She was in high demand because she provided complete service, including windows and laundry. I was paid $5 an hour (about $15 at the time of this writing), which was a pretty respectable wage for a 15 year old. Despite the high pay, I loathed the work. It was boring and tedious and my Sicilian mother was a stern taskmaster. Instead of swimming and going to baseball games, I spent the summer stinking of bleach and folding other people’s underwear. My mom worked me eight hours a day, five days a week and . . . wait. Wasn’t this supposed to be a Star Wars story?


One day during that summer of 1980, while cleaning the apartment of a young couple by the last name of Fenton, I was vacuuming the hallway leading into the bedroom when I caught a flash of gold out of my eye. I looked up and saw a gold record. An actual, honest-to-goodness, gold record awarded for at least one million sales. The light reflected off it like a disco ball. I looked closer and saw it was for Meco’s Star Wars theme single.


I think I almost passed out right there.


I called to my mother and asked her about it. My mother, who never saw the movie, responded nonchalantly that the husband, Mike Fenton, who worked as a casting agent in New York City, was a friend of Meco who gave it him. For a moment, amid all the family dysfunction and the grind of a lost summer, I was connected to a phenomenon — if in only in the most tangential of ways.  I glimpsed behind the curtain and beheld the face of Oz.


On a cosmic scale, considering the present age of the universe of some 13.8 billion years, 40 years is so small a percentage that barely a measurable amount of time has passed between 1978 and 2018. So, in some way, it is still June 1978 and I am still at that theater in Albany, NY. Indeed, every time I watch Star Wars I am transported, albeit briefly, back to that one moment in time and space. My father is still alive, I am still young, I am still sitting on the edge of my seat, and I am still waiting for the movie to begin.