With your nose pressed against the window

There are no jelly donuts for you today 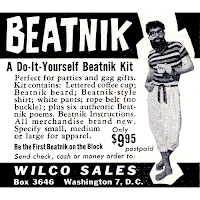 When I picked up a copy of Lawrence Ferlinghetti’s Coney Island of the Mind at a used book sale in 1984, I knew immediately I was a Beat. The raw emotion written in a staccato-like free verse explored every facet of existence in a world that always tries to classify and contain us. Being “beat” is a state of mind that transcends cultural norms. It is born of a discontent with Western society. Forced into a cycle of working to pay for the debt we acquire by existing to serve the system, we lose our sense of individuality and purpose. As long as that dynamic exists, Beats — with their artistic sensibilities, sardonic humor, and obscure literary references — will always be around to both contribute to and question the cultural zeitgeist (one way you can tell a Beat is that we use words like “zeitgeist”).


No serious self-respecting Beat would have admitted to being one. More often, they identified by their aspirations: artist, musician, philosopher, poet, student, teacher, or writer — not necessarily by what they did to pay the rent.  Despite the fact that “beatnik” is a media-invented name (spun off from “Sputnik,” the Soviet satellite first to orbit Earth), the word does define certain common characteristics about the Beats, including a love of jazz, marching to the sound of one’s own “beat,” and sympathy for left-leaning ideology. Nevertheless, Beats never made good revolutionaries. Despite critiques of society in such works as Allen Ginsberg’s poem “America,” most were generally apolitical during the height of their cultural influence in the 1950s and early 1960s.


The Beat Movement was a post-war response to the increasing commercialism and materialism of Western culture and the near-constant threat of war and nuclear annihilation. Rather than participate in a cycle of war and working for the sake of paying debts acquired by working, the Beats instead opted for a simpler life that found joy in valuing our individuality. The beatnik, like the hippie, has become a stereotype, but both were symptoms of a larger conflict between society and the individual. In studying such movements, we learn a little bit more about both.


Aeolus 13 Umbra explores the Beat Movement in a number of posts, including:


A Bucket of Blood (1959): From the Aeolus 13 Umbra YouTube channel. Directed by Roger Corman. Beatnik characters and stereotypes populate this classic low-budget film about an artist with an unusual technique for making lifelike sculptures.


Allen Ginsberg: America: Ginsberg reads a segment of his poem, along with some freaky image processing by yours truly, which remains as relevant today as it was 60 years ago.


American Air: The Sound of the 20th Century: A sound collage I produced that integrates sound clips from Rhino Records’ The Beat Generation CD collection along with other audio from the 20th Century.


Beats on Film: 1959: This review takes a look at two quintessential Beat-themed films: A Bucket of Blood, directed by Roger Corman, and The Bloody Brood, starring Peter Falk, each released in October 1959.


How to Speak Hip (1959): Three cuts from the classic comedy-satire album by Second City alumni Del Close and John Brent.


Interview with Jack Kerouac on The Ben Hecht Show, October 1958: Screenwriter Ben Hecht, who could have provided an enlightening interview with Kerouac, unfortunately treats the Beat author as little more than an oddity and passing fad.


Jack Kerouac: Readings From On the Road and Visions of Cody: Talk show host Steve Allen on piano complements Kerouac’s spoken word delivery to provide us with a classic Beat-era performance.


Ken Nordine: Reaching Into In: One of Nordine’s works which I set to some surreal imagery.


October in the Railroad Earth: Jack Kerouac and Steve Allen: A selection from the 1959 album Poetry for the Beat Generation. Allen's subtle piano creates the perfect atmosphere for Kerouac.


Poetics in the Post-Modern Age: In this essay, I explore one evolutionary development of Beat-era poetic sensibilities — the rhizome.


Radio Documentary: The Cool Rebellion with Howard K. Smith: The noted news announcer takes a look at the Beats through decidedly conservative-colored lenses. An interesting exchange between a Beat and a Square at a nightclub typifies the cultural divide between the middle-aged middle-class and a rising tide of discontent with material Western values.


Radio Documentary: “Footloose in Greenwich Village” WNYC FM (1960): A well-produced portrait of the Mecca of the Beat Movement at the height of its cultural influence.


Review: Edward Dorn's Gunslinger: Dorn is associated with the Black Mountain Poets, contemporaneous to the Beat Movement with whom they shared writers and editors and similar poetic sensibilities. Dorn’s masterpiece, Gunslinger, is a psychedelic ride through the American cultural landscape of the 1960s.


San Francisco Scene (The Beat Generation) — Jack Kerouac: Kerouac paints a portrait in words of the underground Beat scene in the City by the Bay.


The Bloody Brood (1959): From the Aeolus 13 Umbra YouTube channel. Directed by Julian Roffman. Starring Peter Falk with Barbara Lord, Jack Betts, and Ron Hartmann. A man's investigation into his brother's death leads him into the underground world of THE BEATNIKS! Jazz, poetry, bongos, and DEATH!


The Greenwich Village Poets: Charles Kuralt Reporting: No collection would be complete without some bad Beatnik-era poetry.


William Burroughs: "Naked Lunch (Excerpt)”: A short excerpt from his novel read by the Beat icon himself. Video by yours truly.


Note: All media is hosted on Aeolus 13 Umbra's YouTube channel. 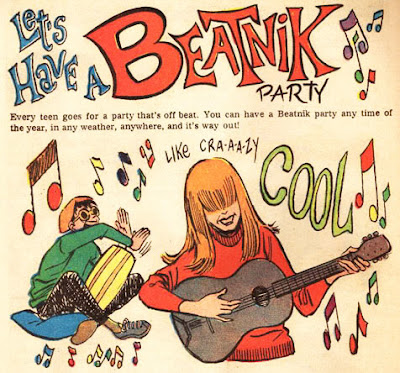 Posted by G. Jack Urso at 1:39 PM
Email ThisBlogThis!Share to TwitterShare to FacebookShare to Pinterest