After Arthur: On the Grief of Cats and Humans

Arthur was a feral cat I caught on August 30, 2015. He died sometime late Saturday night March 4, 2017. Before his passing, I had rescued many cats, and seen off several on their final journey, but few deaths have affected me as deeply as Arthur’s. 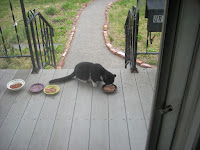 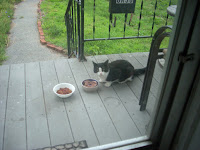 Wellington, March 2013.                                    Arthur, September 2014.
Arthur was part of a community of black and white cats which had congregated in my backyard in the late Winter of 2013. His story really begins with his father Wellington, who carefully protected two young 6-7 month old kittens I named George and Gracie, and Gracie’s own brood of five 4-5 week old kittens. I rescued three of the kittens, but the other two disappeared before I could get them. Nothing was as heartbreaking as watching Gracie plaintively call for her kittens who never responded. Gracie waited around for a few days then left never to return. George disappeared, and Wellington, ever the tom, went on walkabout. George (apparently a girl) later reappeared in July VERY pregnant and gave birth to six kittens. I adopted out four and decided to keep George and two of her kittens.
Gracie seemed gone for good, but Wellington still came around occasionally, and, as winter began to set in that year, I managed to capture him. An older cat of approximately five years old, elderly for feral cats whose life span is only about five to six years in the wild, Wellington was found to be FIV positive (the feline equivalent of HIV), and upon the recommendation of the veterinarian and my colleagues in cat rescue, I was advised to put him down, which was the conventional wisdom at the time. I also had an 11 year old cat, Muffin, with cancer so they expressed concern about possible infections. Confused, and not knowing what else to do, I agreed. As it turned out, another vet told me there was no need to put down an FIV positive cat if they’re not aggressive, and Muffin died a week later in any event. I swore I would never let this happen again to another FIV positive cat that came into my life.
About a week or so after Wellington was caught, Arthur began showing up. He was younger than Wellington, but with the exact same tuxedo pattern, so I convinced myself Wellington was his father. Arthur lived under my front porch and I fed him for about a year and a half, through two bitter winters, until I decided I could not see him go through it again. I was determined to rescue Arthur and do right by him, giving him the chance his father did not have. After about a year and a half, on August 30, 2015, my opportunity arose and with the assistance of a drop-trap, I got him!
The day I caught Arthur was one of the happiest days of my life — though I don’t think he shared my sentiments. Imagine being a free-roaming cat one minute and holed up in a stranger's house the next. I joined together two very large dog cages and quarantined him. He was allowed out every now and then until after two months I allowed him free access to the house, and the other cats. I was prepared for a blow up between the feral male tom-cat and my decidedly domesticated house cats, but no such confrontation occurred. None — not even a snarl. In fact, except for an occasional sniff, they generally ignored him.
I did not take him in to get fixed right away. It was a gamble, but he was terrified of being handled by humans and I did not want to stress him out before he settled down, and frankly I did not want to know if he was FIV positive. He was non-aggressive with the other cats, who seemed to accept him as another one of my rescues, and he immediately used the litter box, never sprayed, or attempted to mate with the female cats.


I had good intentions to get Arthur fixed, but I was working seven days a week at the time, and other needy rescues also needed my assistance. Then, in a miracle, in March 2016, after nearly three years since I last saw her, Gracie returned to my back yard, and very pregnant! As I take pictures of all my backyard strays, I was able to confirm it was her. I later found out she turned up in a feral community across the street that was taken care of by an old man until his recent death. That she thought to return here was evidence of some bond between us that she remembered. Feral for the entire time, I’m not sure how many litters she produced, but there was no question I was going to catch her this time. I caught her within 48 hours, and within another 48 hours gave birth to five kittens. As with her sister George, I decided to keep two of the kittens, Ditto and Silver.
Any fear that a feral tom-cat would be aggressive towards the kittens was soon alieved. As they grew, Arthur tolerated their inquisitive sniffs and playful meows. I converted an area in my basement into a cat sanctuary. It included such features as a linoleum floor, two beds, a cat villa (sort of like a dog house for cats), assorted toys, a water fountain, and plenty of food. I removed the door from a large dog crate and set up a bed inside, which Arthur promptly took over as his throne room. Set at the far end of the basement, it offered him a strategic view of anyone coming down the stairs. The kittens, Ditto and Silver, kept going in and co-opting the crate, much to his annoyance. Surprisingly, Gracie became Arthur’s near-constant companion. They seldom got very close, but if he was upstairs, she was upstairs. If he was in the basement, she was in the basement. If he was on the bed, she was on the bed. If he was in the living room, she was in the living room. It’s possible they knew each other on the outside, but still, it was a bit odd. Eventually, Gracie ignored her kittens altogether, preferring Arthur’s distant and quiet company instead.
When Cats Cry

Cats sometimes react rather oddly when another one of their kind passes. Although they do not show emotions as freely as dogs, they nonetheless register grief in other, more subtle ways. I have a seven-foot tall cat tree whose top tier is a prized perch. After Muffin passed in January 2013, over six months passed before another cat, Frisky, dared ascend its lofty heights to command the view. Likewise, when Frisky passed away in October 2016, the other cats again avoided the top perch for a couple months.  ﻿
Finally, in late February 2017, I got Arthur fixed. While I thought he was perhaps three to four years old, the vet said Arthur was over five years old – like Wellington. For an outside cat, whose life span is relatively short, he was an old man. His breathe stunk, his teeth needed to be pulled, and his fur had started to mat, likely because he wasn't cleaning himself often enough. I also discovered that he was FIV positive, just like Wellington. Since Wellington’s death, new research confirms what my vet said — as long as the cat is not aggressive there is no more a chance of another cat getting FIV than with HIV between humans.
In all this time, I had never heard Arthur meow — hiss, yes, but not meow. Nevertheless, when we picked him up from the vet he called out to us with a sad mew. A painful and confusing experience, he probably didn’t think we would come back for him.
After getting Arthur fixed, his behavior began to change. He stayed in the basement and would not come upstairs. He ate less and seemed more skittish, avoiding even the gentle touch of my petite housemate Kim. One Saturday night, Kim and I tried to chase him upstairs, but Arthur proved to be a slippery customer. Not wanting to stress him out too much, we eventually left him alone. Late, the next morning, I discovered a pool of urine next to the litter box in the basement. This was uncharacteristic for Arthur as he was fastidious in his habits. Finding no trace of him, Kim and I searched until we found his body under the folding table next to the washing machine. The only thing I could think of is that our chasing him around must have scared him — perhaps thinking we were going to take him to the vet again — and caused a heart attack, during which he voided his bowels next to the litter box before finding refuge under the table. It was heart-breaking, and I feel the guilt of having been an instrument in the death of two related cats.
After Arthur
After Arthur passed, we closed up the basement door and for three days neither Kim nor I ventured downstairs. We even kept the cats upstairs. Gracie and her kittens, Ditto and Silver, anxiously looked around the house, I supposed looking for Arthur. When we finally opened up the basement door, Gracie and the kittens were the first ones down and they immediately zeroed in on the folding table. Silver sniffed around a bit, lowered his rear end, and promptly peed on the spot where Arthur died. I almost didn’t have the heart to clean it up. I had his remains cremated, some of which I buried in the backyard where, I suspect, he always belonged.﻿
﻿
﻿
I know better, but I still haven’t yet washed that old blanket of his. I likely never will.

Posted by G. Jack Urso at 11:06 PM
Email ThisBlogThis!Share to TwitterShare to FacebookShare to Pinterest