The Antikythera Mechanism: A Relic of Ancient Greek Science

In 1901, corroded bronze relics were found in a shipwreck discovered off the island of Antikythera near Greece. For years the significance of the find went unnoticed until 1959 when Dr. Derek De Solla Price of Yale University published a paper in Scientific American. At first the three pieces of corroded bronze seem unremarkable, except for a similarity to modern clockwork. As for its purpose, archaeologists were as mystified as the sponge divers who first discovered it in the blue waters of the Mediterranean Sea.


Through the corrosion, Price could identify gears around a large main plate. At first sight it was thought to be some sort of astrolabe. Years of research, however, would reveal a far more complicated device.

X-ray photographs revealed sliding circular plates marked with scales of measurement (fig. 2). Scientists have dated the construction of the mechanism to around 87 BCE and the shipwreck circa 76 BCE. Closer examination by Price revealed it to be a complicated mechanical device comprised of more than 20 gears, including a differential gear –  technology thought not to have existed before 13th Century Europe (Price 60). Later research suggests at least 30 gears (Freeth 83). One of the earliest European mechanical clocks capable of reproducing the functions of the Antikythera Mechanism, including planetary movements, was not made until the mid-14th Century (fig. 3) ("Mechanical Clock" 50).


The mechanism, as it originally appeared, was set in a wooden rectangular box slightly larger than an 8½ by 11-inch sheet of paper. A hinged cover protected the front and back of the device and a handle on the side turned the gear works of the mechanism. Directions in Greek, now barely visible, were inscribed on every available surface (Price 64-65).


Inside the front cover, fixed on top the main driving gear wheel, is a single large, circular dial with two scales. A fixed scale names the signs of the Zodiac and a second movable slip ring shows the months of the year. The gearing system’s handle manually turned the gears with the large main gear turning in a clockwise direction (Price 64). 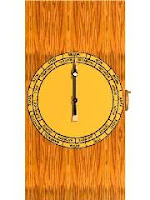 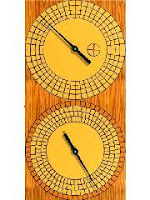 Fig.4 : Artist's reconstruction of the front (left) and back (right) dials.

On the back are two dials. The top dial has four slip rings and is thought to have indicated the positions, and times, of the rising and setting of the five planets known to the Greeks (Mercury, Venus, Mars, Jupiter and Saturn). The lower dial has three slip rings and seems to indicate lunar phases as well as when the moon rises and sets. There is also a smaller subsidiary dial, comparable to the seconds’ dial of an analog stopwatch. When the handle was turned all the gears, including a differential gear, turned. Arms, like those of a modern clock, would turn as well as the eight slip rings (Price 64).


Once the operator set the position of the Sun or Moon on the front plate, the Antikythera Mechanism automatically adjusted all the dials providing solar, lunar and planetary data for the corresponding time indicated by the user. The mechanism is thought to have been accurate to one part in 40,000 (Zeman).


How reliable was the mechanism? The teeth of the gears were triangular rather than square, which would have affected the accuracy and durability of the mechanism. Close examination reveals that the device, constructed of a low-grade tin bronze, was repaired twice, suggesting the device saw frequent use (Price 64).


Ancient Greek science was generally more advanced than is usually acknowledged. Over 200 years BCE the Greek scholar Eratosthenes calculated the circumference of the Earth to be 25,000 miles, just 99 miles more than the actual figure, 24,901. Several decades later, another Greek scientist, Posidonius, believing Eratosthenes to be wrong, calculated the circumference to be 18,000 miles (this was the figure Columbus would use when planning his first voyages in 1492). Posidonius was from island of Rhodes, where the Antikythera Mechanism is thought to originate (Price 61).

﻿﻿Later research suggests the Corinthian colonies in northwestern Greece or Sicily as possible places of origin. Sicily, of course, is where the city of Syracuse is located, also home to the scientist Archimedes, though the device dates to a period after his death (Freeth 83).


﻿﻿The technology behind the Antikythera Mechanism stems from geometrical models of the solar system used by ancient Greek philosophers and scientists such as Plato and Archimedes. This type of model, called an orrey, is a clockwork device that utilized a gearing system to replicate the motions of the planets. The Antikythera Mechanism, however, is a far more sophisticated machine that processed a multitude of calculations.


The technical challenges of making by hand a complicated device such as the Antikythera Mechanism during the ancient era suggests that only a handful of individuals possessed the skills to manufacture it, relatively few may have been produced, and those that were became highly valued items.


What is the impact of this lost piece of Greek technology? The Antikythera Mechanism represents the first use of the differential gear, the technology we need to build clocks and make cars move. Consider the ancient Greek engineer Heron (also known as Hero) of Alexandria during the First Century CE who invented the aeolipile. The aeolipile is a metal ball with two spigots mounted on either side of the device and pointed in opposite directions. Filled with water and heated to the boiling point, the steam produced would turn the aeolipile around. Essentially, this is a primitive steam engine.


Combining the aeolipile with the differential gearing of the Antikythera Mechanism could have produced any number of labor-saving devices. Nevertheless, while the aeolipile is another tantalizing peak into the potential of Greek science, the device itself was not considered to be anything more than a clever children’s toy. With slavery so widespread a practice and integral to the economies of the ancient world, there was little incentive or need to create labor-saving devices.


The existence of the Antikythera Mechanism leads us to reevaluate our presumptions about the level of the technical sophistication of ancient Mediterranean cultures, as well as to consider how different our civilization would be if this technology had not been lost to the Dark Ages. Such a device, had it been applied to other technological areas during the ancient Greek and Roman eras, could have accelerated the pace of human invention more than 1,000 years ahead of where we are today.

Related Content
The following item is a short documentary about the Antikythera Mechanism that I produced in conjunction with my research: