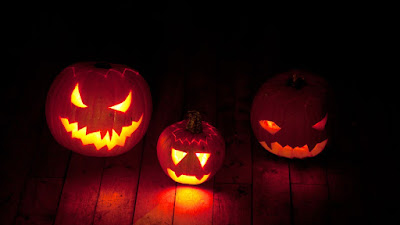 Halloween stands alone among the holidays celebrated in Western nations. Christmas, Easter, Independence Day, Valentine’s Day, St. Patrick’s Day, May Day, Hanukkah, Kwanzaa, New Year celebrations — these are all life-affirming holidays. Halloween, however, celebrates not horror or evil spirits as much as it compels us to confront our own mortality. Indeed, by making Halloween essentially a children’s holiday we are psychologically preparing the young for questions regarding death and the afterlife, as well as the sometimes random and unexpected violence in modern society.


Perhaps . . . mostly though it gives both young and old a reason to party and watch old films.


Readers of Aeolus 13 Umbra will notice that the focus here is often on the darker side of existence — assassinations, massacres, serial killers, dictators, war, and death. I also have a fondness for classic horror and sci-fi and over the years have posted a number of items related to this most curious ritual of Western civilization — Halloween.

Arthur John Shawcross: The Monster on Alexander Street: Some horror stories are very real, and sometimes they’re your next-door neighbor.
Dementia 13 (1963): Progenitor of later "slasher" films, Dementia 13 was written and directed by Francis Ford Coppola, produced by Roger Corman, and stars William Campbell, Patrick Magee, and Liana Anders. Released in September 1963 and distributed in the United States by American International Pictures as the second feature on a double bill with Corman's X: The Man with the X-Ray Eyes.
Halloween Howls: 45 Minutes of Fear: No Halloween would be complete without creepy music. Usually these soundtracks are fairly forgettable, but this one is a masterpiece of spooky ambience.
House of Dark Shadows (1970): This extended trailer for the film based on the TV series Dark Shadows hits all the right notes for classic horror film buffs. Essentially a gothic horror tale, House of Dark Shadows lures us in by showing the anti-hero vampire Barnabas Collins sympathetically then hits us with outbursts of violence that remind us who he really is — a vicious, predatory monster who leaves dead bodies in his wake. While the trailer has some tongue-in-cheek humor, the film is deadly serious.

House on Haunted Hill (1959): Directed by William Castle. Stars Vincent Price and Carol Ohmart, also with Elisha Cook Jr. In this classic, critically-acclaimed film, five people will be given $10,000 each if they can stay overnight in a haunted house — and survive.

Medieval Meditations on Death (poetry): Fragments of original Medieval verse written in the wake of the Black Death (Bubonic Plague).


Nosferatu, aka Nosferatu: A Symphony of Horror (1922): The classic German horror film based on Bram Stoker’s Dracula with only a few changes to names and places. Directed by F. W. Murnau and starring Max Schreck as the vampire Count Orlok. In the opinion of many, this version of Dracula has yet to be surpassed in nearly 100 years of filmmaking.


The Little Shop of Horrors (1960): Directed by Roger Corman. The love story between a boy, a girl, and plant with the taste for blood — human blood!


The Monster Club (article and video clips): This 1981 horror anthology film starring Vincent Price and John Carradine is told with tongue planted firmly in cheek; however, some of the tales, such as "The Shadmock" and "The Ghouls," are truly terrifying. Horror-themed rock music videos by Punk and New Wave British bands of the era round things out.
Vincent Price's Dracula (1982): Vincent Price hosts this one-hour documentary on Dracula, the man and the myth.