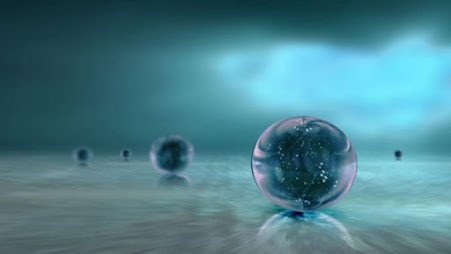 
Having attended an Evangelical Christian college as a young man, I quickly became acquainted with efforts by those claiming faith in a creator using various scientific or mathematical means to prove the existence of God — for example, using archaeological and geological “evidence” to find Noah’s Ark, or prove Moses could have separated the Red Sea, or to disprove the age of the Earth or evolution. Quite frankly, even before I explored my basic agnostic nature, I found these efforts incredulous. If God could be “proven” then what is the point of faith? As defined in Hebrews 11:1, “Now faith is the substance of things hoped for, the evidence of things not seen.” If the existence of God could be proven, then the qualities that faith imparts to believers — strength of character, vision beyond what we see with our eyes, and a belief that something better can be reached — would vanish, for better or for worse.


Nevertheless, the religious faithful latch onto such things as the circumstellar habitable zone around the stars where the unique qualities that foster life can only be found, believing that to be proof of God. Yet, we know that life can exist in very inhospitable areas, such as in the oceans depths were anaerobic bacteria thrive around volcanic vents. That the desolate and apparent lifeless red planet Mars also lay within the habitable zone seems to negate its magical life-giving powers makes little impact on those who latch onto the concept as proof of God.  Europa, the water-covered satellite of Jupiter could very well host life at the bottom of its vast oceans, nurtured by volcanic vents probably not very different than those on Earth, and it is far outside the habitable zone. Though I think it likely, it may be some time before that hypothesis is proven.


One mathematical formula being used to prove God is the theoretical probability formula, which calculates the probability of a favorable outcome. When applied to in this scenario, there are two possibilities: the conditions for life will exist or they will not exist. While the number of solar systems in the universe is vast, those using theoretical probability formula assume that it is a theoretically quantifiable, if immensely large number. When dividing a finite number by a very large number the answer will be very small, almost zero. Yet, life does exist, so the faithful therefore infer that an external force must be responsible: i.e. God. All this presumes that time is also quantifiable as the age of our universe is estimated at approximately 13.8 billion years old since the Big Bang.


However, that may not be true.


Current theory suggests that what we know as our universe occupies only a small part of a larger universal reality. All the matter that comprises our universe may be just a small local group that is part of an infinite reality where multiple “Big Bangs” have occurred, creating other universes so far and distant from our own, or operating under different physical laws, that we can never observe nor interact with them — bubbles of individual universes in a quantum reality. Further, this universal reality, and therefore time itself, may be infinite. This larger universal reality may have always existed with no beginning and no end.


If the larger universal reality is infinite, it has had an infinite amount of time to create a specific local universal region where the qualities of life can thrive. This is akin to the Infinite Monkey Theorem which postulates that given enough time, a single monkey, or many monkeys, hitting random keys on a typewriter will produce a work of Shakespeare. The probability is extremely low, but considering that time may be infinite it cannot be zero.


Though given my experience with human primates I think it more likely they will end up flinging their feces at each other, but I digress.


In this sense, with an infinite amount of time, the conditions for life will eventually emerge without a deus ex machina causality. That being said, the proponents of using theoretical probability formula to prove the existence of God assert the opposite — that a God is necessary to compel feces-flinging monkeys to produce a work of Shakespeare. Well, on one hand, they may have a point, but when applying it beyond hyperbolic theoretical thought experiments we run into a problem. Primarily, theoretical probability formula fails to produce an accurate result when infinity gets involved.


A passage from the Hitchhiker's Guide to the Galaxy illustrates the problem inherent in applying theoretical probability formula to the question of the odds of life developing in our universe: “Any finite number divided by infinity is as near to nothing as makes no odds, so the average population of all the planets in the Universe can be said to be zero.”  Meaning the answer will always be essentially zero no matter how you figure it. While a humorous bit by author, Douglas Adams, an atheist, it nonetheless shows that the math is rigged to result in zero, despite what we see.  Since we do exist, the only reasonable explanation is that the math is flawed, not that a supernatural being brought it about.


Further, the theoretical probability formula presumes an event either will happen or will not happen; however, given the quantum nature of the universe an event can also be said to be happening and not happening at the same time until there is an observer. A binary option, that the universe can either exist or not, is an inherently fallacious assumption in a quantum reality. Whether it does or does exist not depends on whether it is being observed and, given an infinite amount of time, random chance. This illustrates the erroneous assumption of applying a theoretical probability formula to the question of proving the existence of God.


The Leap of Faith


Given our understanding of the true nature of the universe, and the laws under which it operates, is so small, coming to the conclusion that a deity is responsible seems to be a leap of faith, not a mathematical conclusion. I’m not an atheist like Douglas Adams, but using math to prove something that is a matter of faith only proves there is a lack of faith, not a deity.


While I concede I am agnostic, it is very specific to questions taken for granted by those in the Abrahamic faiths — divine creation, the virgin birth, resurrection, etc. What I have learned in my study of cosmology, however, is that there is indeed a reality much larger than we can possibly conceive. The absolute truth of the structure of the universe may be the God that everyone is seeking. I believe it is, but I only have faith to go by.


At one point in history, our conception of the universe included just our planet, which was at the center of a solar system around which the Sun orbited. Then, we lived in a universe where the Sun was at the center and the Earth, Moon, and other planets orbited it, and the stars where fixed in place far beyond on silently moving crystal spheres. Then, we believed we inhabited a galaxy of stars until about a hundred years ago when we learned our galaxy was just one of innumerable others. Now, our universe of galaxies may be just one local universal group in an infinite reality of other universes. Ironically, it took a leap of faith from such scientists like Copernicus and Galileo to further our understanding of the true nature of the universe — faith in math and the scientific method, not God.


Those of faith have a quantifiable God who created a single universe at some point in the past. However, the possibility is that we may inhabit a reality that has always existed, and the existence of what we call our universe has been relatively short in comparison to the larger, timeless reality we inhabit. As previously noted, when dividing a finite number by infinity the result is so close to zero that we can hardly be said to have existed at all. That we do exist may be the result of infinite chances in an infinite universe. So, with all due respect to Mr. Einstein, maybe God does play dice after all. Ultimately, it underscores just how insignificant we are in the greater scheme of things.


In a quantum universe, I don’t feel constrained by the binary options that the odds for life may be small or large or that there is or is not a universal intelligence we call God. In each case, both options may very well have an equal chance of being or not being depending on whether or not it is being observed. If there was no life at all to observe the universe, would either the universe or what we call God exist? Maybe our existence is simply the universe, and God, hedging its bet that it does indeed exist — or it may be all just a crap shoot, or it may be both, or it may be neither.


But don’t quote me on that. I may have to check my math.

Some of my further thoughts on the nature of the universe,