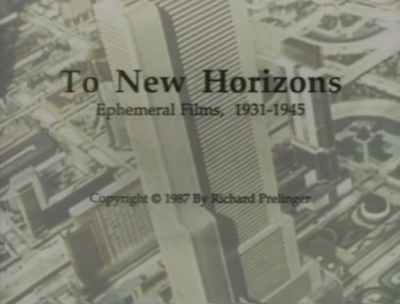 In 1987, The Perlinger Archives released a two-volume collection of short subject films in the public domain. Produced by Richard Prelinger and Robert Stein, Ephemeral Films Vol. 1, “To New Horizons” (1931-1945) and Ephemeral Films Vol. 2 “You Can’t Get There from Here” (1946-1960), include commercials, educational and industrial films, social guidance films, and home films that bracket the pre-war and immediate post-war period. Both collections in their entirety and links to individual segments are available below from the Aeolus 13 Umbra YouTube channel.

Click on the above video to view the complete film.
Ephemeral Films Vol. 1, “To New Horizons” (1931-1945) is dominated by productions sponsored by automobile companies. The period of time covered by this collection represents the glory waning years of the Machine Age, generally considered to have occurred between the years 1880 through 1945. This is the era of skyscrapers like the Empire State Building, large ocean-going palaces like the Titanic, massive infrastructure projects like the Hoover Dam and the Tennessee Valley Authority, electricity, telephone, film, radio, aircraft, and a myriad of weapons of war. Noteworthy segments in this collection include Master Hands (1931), an industrial film with no narration, just visual images, which shows American mass production at the height of the Machine Age. ’Round and ‘Round (1939), is a stop-motion animated educational film explaining how industry and consumerism work and interact with each other.


Ephemeral Films Vol. 2, “You Can’t Get There from Here” (1946-1960) shifts from the industry-heavy segments of Vol. 1 to more socially-oriented topics. There are still some industrial films like A Report to Homebuilders (1946), and Two Ford Freedom (1956), and the surreal Design for Living (1956) is a must-see, but in this era we begin to see what have been termed as “Social Guidance films.” Segments like Shy Guy (1947), Are You Popular? (1947), Dating: Dos and Don’ts (1949), and the The Last Date (1950) are stereotypical of this genre. Flickering against screens in classrooms across Baby Boomer-America, these films formalize social expectations for the youth. In a way, they helped to ease the transition from pre-teen years to adolescence, but from a decidedly white middle-class perspective. Indeed, one will be hard-pressed to find any people of color in these films. While one can assert this is a reflection of the era, the systemic racism of the times, manifested in segregation, infers a concern only with the behavior of those of Northern European decent. For minorities, the message was plain; this was a reality where they did not exist.

Click on the above video to view the complete film.
Some production companies turn up repeatedly. The Jam Handy Organization was founded after World War I by Henry Jamison "Jam" Handy (1886–1983), an Olympic breaststroke swimmer and water polo player. According to Rick Prelinger in "Smoothing the Contours of Didacticism: Jam Handy and His Organization" (Learning With the Lights Off: Educational Film in the United States), the company turned out approximately 7,000 motion pictures and nearly 100,000 slide shows before closing shop in 1983.


The leader in Social Guidance films was Coronet Instructional Films, established in 1934. If somehow you managed to miss the industrial films of Jam Handy as a Baby Boomer from the late 1940s through the 1970s it was hard to miss a Coronet production. Known more for quantity than quality, Coronet nonetheless was an early user of Kodachrome film stock. The company ceased production in 1984 after a merger with MTI Films, which in turn was later acquired by Gulf and Western Industries. It probably is no coincidence that both Jam Handy and Coronet came to an end in the early 1980s as the video cassette recorder and affordable video production equipment exploded in popularity about the same time.


Aeolus 13 Umbra has previously reviewed post-war mass media in RetroTV Commercials: A Resource for Historical Study.  Indeed, this site’s mission statement is to focus on the influence of society on us. Individually as human beings, and collectively as a civilization, we are the sum of many parts. Some are major historical events. Some are artistic or literary works. Some are musical or poetic. Some are important achievements in science and technology. Some are tragedies. Some are personal stories.


Master Hands (1931). Producer, Jam Handy Organization. Sponsor, Chevrolet Motor Co. Note: An excellent industrial film production that tells its story with no narration, just visual images, and shows America at the height of the Machine Age. In 1999, Master Hands was selected by the National Film Registry for preservation.


Back of the Mike  Completed in 1937; released to theaters 1939). Producer, Jam Handy Organization. Sponsor, Chevrolet Motor Co. Note: Educational film on how radio productions are made.


Let Yourself Go  (1940). Producer, Jam Handy Organization; Sponsor, Chevrolet Motor Co. Note: Efficient interior design and yet another segment from Chevrolet on how to relax.


The Last Date (1950). Producer, Wilding Picture Productions. Sponsor, Lumbermens Mutual Casualty. Note: Dick York returns, this time as a daredevil behind the wheel — Can disaster, death, and horrible facial disfigurement  be far behind?


What to Do on a Date (1951). Producer, Coronet Instructional Films.


Ike for President (1952). Producer Roy Disney. Sponsor, Citizens for Eisenhower-Nixon Note: This is the full-length version of the classic election commercial often seen in short clips.


Design for Living (1956). Producer, MPO Productions. Sponsor, General Motors Corp. Note: This one is bizarrely weird, but an overall outstanding production in its own way. A surreal look at a concept for future consumerism. Interesting set design and model work.

Posted by G. Jack Urso at 11:29 PM
Email ThisBlogThis!Share to TwitterShare to FacebookShare to Pinterest