Evening Ragas from Benares is a 1981 Academy Sound & Vision recording which was later released in 1986 and 1994 by the Musical Heritage Society. Originally recorded in December 1967 in Benares, India by Deben Bhattacharya, the 40-minute recording is comprised of three pieces. Click on the links below for individual tracks or on the video above for the complete album on the Aeolus 13 Umbra YouTube channel:


Selections from the liner notes to Evening Ragas from Benares:
Sitar 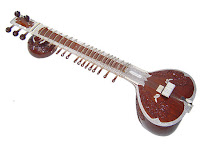 The sitar (right) is undoubtedly the most popular stringed instrument of north and central India for raga music today. It is the direct descendant of the vina, the stringed instrument of India played for 2,000 years. The present form of the sitar is attributed to 13-century musician and innovator, Amir Khusru, and is less complicated to play than the vina. Most sitars have seven playing strings together with a number of sympathetic strings which resonate to enrich the sound. On its long neck are movable metal frets fastened by silk or gut strings. Hollow gourds are attached to the back of the neck, usually at each end, to increase the volume of the sound. The strings of the sitar are plucked using a wire plectrum fitted to the right index finger.
Surbahar

The surbahar (left) resembles the sitar in appearance but is larger in size and scope. It is nearer to the vina in its quality of sound and is regarded as superior to the sitar as an instrument. The vicitra vina belongs to the vina family of stick zithers and has five melody strings, three built-in drone strings, and 11 sympathetic strings. Unlike the sitar, the vicitra vina is fretless, but the skill and expertise of the musician enable him to unerringly find the exact note in its long neck. 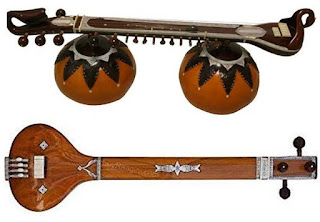 Vicitra Vina (top), Tambura (bottom)
The accompaniment on the recording is provided by the tambura (above), a four-stringed drone instrument, and the tabla (below), a pair of drums which make the tala or rhythm which is an essential part of Raga music. The table is played by both hands — the right hand drum gives the strong beats and the left hand drum the soft strokes.
﻿
The raga Puriya Kalyan is associated with the early hours of the evening and is heptatonic or in the seven-note scale. The rhythmic accompaniment, or tritala, is in 4/4 time. This raga, also known as Purva Kalyani, is of a feminine nature and expresses tenderness and love.


Pilu, a raga of the late afternoon, is in the seven-note scale and expresses a bashfulness and timid love. The severe and courtly midnight raga Darbari is again in the heptatonic scale. Both Pilu and Darbari were recorded during a gathering at a private house and the sounds of passing travelers and the cries of a vegetable salesman in the street outside combine to bring the atmosphere of India to the listener.
— Deben Bhattacharya

Posted by G. Jack Urso at 10:07 PM
Email ThisBlogThis!Share to TwitterShare to FacebookShare to Pinterest