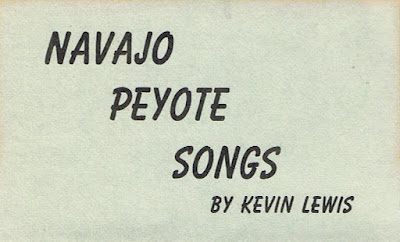 Cover from the cassette (author's collection).
Navajo Peyote Songs Volume 1, by Kevin Lewis and produced by Millard Clark, is a 1990 release by Indian Sounds on cassette that I picked up while visiting the Little Bighorn Battlefield the same year (then The Custer Battlefield). While I don’t understand Navajo, and they are not indigenous to the Dakotas, I found the recording a nice counterpoint to The Songs of the Seventh Cavalry. The rhythmic chanting provides a meditative space to immerse oneself in another culture. The full recording of twenty songs is provided below.

Lewis, according to ALLMUSIC, is of Navajo/Cherokee heritage and a medicine man trained to sing peyote songs by his grandfather Bud Lewis, who lived to 116 years. As a result, the lineage of tradition from the Old West to our ears is only one generation removed from that era. Herschel Kaulaity, of Cheyenne/Kiowa heritage, provides the drumming. No titles or times are provided for the songs, nor are there any liner notes. While this is a missed opportunity to educate the listener, this does allow us to get lost in music that feels more like an expression of nature than the typical over-produced commercial effort. Volume II was released on CD in 1992.

The one break in the spiritual tone comes about 17 minutes into the recording when Lewis, caught up the ritual, begins chanting “Happy Birthday” over and over. While it must have some significance, without a translation it seems a little incongruent with the rest of the album; however, they’re not called peyote songs for nothing!

Posted by G. Jack Urso at 11:04 PM
Email ThisBlogThis!Share to TwitterShare to FacebookShare to Pinterest